This Year's Championship Shirts Have Nothing on the 1978 Version

Share All sharing options for: This Year's Championship Shirts Have Nothing on the 1978 Version

First things first: Congrats to the Lakers on winning the 2009 NBA Finals.  As hard as it is to repeat as a champion, it's just as hard, if not harder to come back from losing in the championship round and then win it all the next year.  I guess I was half-right on my prediction.

In the coming days, the Lakers will get parades, accolades, and lots of baths with Gatorade (except Kobe, who is only allowed to bathe in Vitamin Water).  As champions, they're well deserving of all the accolades that they'll receive. 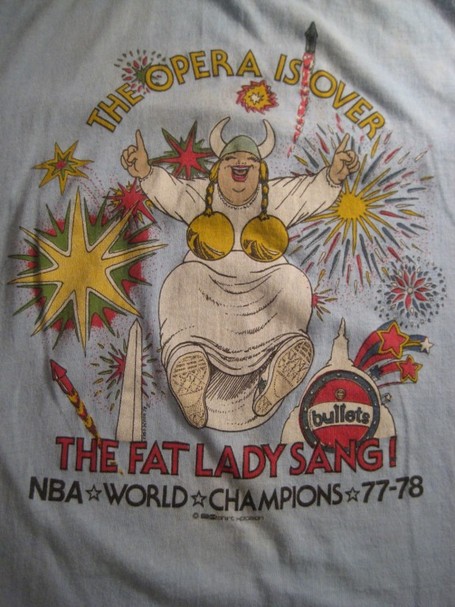 Now that's a championship shirt I can get behind.  Most of you probably know the story behind the fat lady singing, but in case you haven't this should help you understand the shirt and the history behind it a little better.  Let's hope that next year's shirts break the generic mold that we've seen the last few years.