What About Letting our Expiring Contracts...Expire?

Share All sharing options for: What About Letting our Expiring Contracts...Expire?

Bad contracts are just a way of life in the NBA.  Every team has at least one financial albatross on their hands, even the good teams.  The Cavaliers finished with the best record in the league this season despite the fact that Ben Wallace was their highest paid player and Wally Szczerbiak made more than Mo Williams, Delonte West, Zydrunas Ilgauskas, and Anderson Varejao.  The Lakers snatched the top seed in the West even though Adam Morrison is making more than Trevor Ariza.  Denver's second highest paid player this season averaged 11 points and 6 rebounds.

In Washington, the two worst contracts on the books are Mike James and Etan Thomas.  Coincidentally, both contracts expire at the end of the 2009-10 season.  The conventional wisdom is that Ernie Grunfeld is going to package those two contracts to a team looking to rebuild throught the 2010 Free Agent spendapalooza and get a player or two who can help out right away, but would stick around for a longer amount of time. 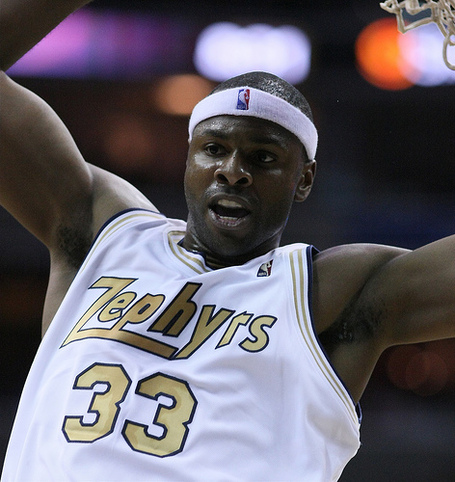 Brendan Haywood's contract also expires at the end of the 2009-10 season.  Unlike James and Thomas, I don't think you'll find too many people arguing that Brendan Haywood is overpaid.  His performance last year and the plummet the team took without him in the lineup last year showed that he's underpaid, if anything.  He's due to make $6 million this season and when he hits the market this summer, it's hard to imagine him making less than that when he gets a new contract next summer.

So if we're going to keep Brendan around after 2010 (which I'm assuming we will), we're going to have to same some expiriing salary around to make up the difference for Brendan's pay raise.  That is, unless you think that Abe Pollin is really going to go off the deep end in his first dip into the luxury tax.  It would be a pleasant surprise, but I don't think that it's one we can count on happening.

Ultimately, it comes down to a matter of what Brendan's value is on the open market and whether or not there's a player out there that can be obtained who can make a bigger impact than Haywood.  I'm not a general manager so I can't answer either question with any amount of certainty, but I'd be inclined to believe that Haywood is better than any player we can get for our other two expiring contracts.

The ideal situation would be finding a trade partner that could give us a decent contributor and a smaller expiring contract to make up the difference between Haywood's current contract and what he'll make in his new deal.  (Something like this, maybe?)  But if the ideal situation isn't out there, I'd rather keep Haywood then go all in for another contributor whose salary might force Brendan to look for greener pastures.