In keeping with my assessments of the top draft prospects, I present my review of James Harden of the Arizona State Sun Devils. 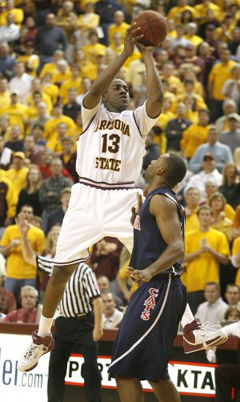 
So, with the Draft Lottery over, and the Wizards slotted at the number 5 pick in the 2009 NBA Draft; I thought it was time to continue my draft prospect assessments. What better player to profile than the one player that most mock drafts have listed at number five; James Harden.

Harden is one of those players that is difficult to scout. Watching games, I'd think that he had an 'OK' game, only to find out after checking the stats that he had 32 points, 9 rebounds, 3 assists and 3 steals (as he did in a loss against Baylor in November). I watched a game on my DVR yesterday. The game was from November when he scored 40 points with 8 rebounds and 4 assists in a win at UTEP; and today, I can honestly say that I cannot remember any of the plays he scored on. The kid can flat out score; but he's like Rip Hamilton - sneaky. You look up, and he's got 20 at the half; and you can't remember how he did it.

Harden scores in totally unremarkable ways. He's an efficient scorer, hitting more than 56% of his 2-point shots. Smart in the open floor, he's very good in transition. He's a good catch-and-shoot guy. He can score in ISO situations, using shifty hesitation and change of pace moves to get open. He's also very good in the pick-and-roll play. Especially against aggressive, athletic or taller opponents, he's effective at using jab steps or pump fakes to create space for his shot.

Harden is a left handed and that may give him a slight advantage at the next level. He is more comfortable going left. He didn't seem as sure and confident going right; and he'll have to work to correct that at as a Professional.

Although he's not especially athletic, he seems to score well inside and on drives to the hoop. Nothing he does around the rim is spectacular, but even so, the ball finds the bottom of the net. He uses his body to shield the ball, moves the ball around, and concentrates even through contact, until there is an opening and the shot is released. Like I said, not spectacular, but effective none the less. He reminds me of DeShawn Stevenson, as Stevenson does a lot of the same things on his drives (using his body, or the rim to shield the ball, moving the ball around, etc...); except that Harden actually finishes at the rim.

One glaring negative is that Harden is turn over prone; however part of that is due to his high usage rate. John Hollinger says that "young players with high turnover rates tend to show more progress in subsequent years". He was right about Nick Young, so let's hope he's right about Harden.

Defensively, Harden is fundamentally sound; but probably more importantly, he puts forth effort at the defensive end. It's hard to get a good read on Harden's defensive abilities because Arizona State primarily used a zone defense. But when he was matched up, he stayed in a defensive stance, and was effective in staying in front of his man. He's certainly not a shot blocker, but he contests shots well, and averaged over 2 steals per game. His average athleticism and quickness may hurt him defensively in the NBA, especially against bigger and quicker opponents; but Harden is an intelligent player, and a hard worker, so he may develop into a good defender at the next level; especially if he continues to put forth the effort.

There were times this year when I thought that Harden was too passive in games, and times that I thought he should take over the game, but he didn't. There are times when he becomes too unselfish, and passes up a shot to pass to a teammate. That may be a good trait, depending on which team Harden ends up on.

Overall James Harden is a nice player - and should eventually be a Starting Shooting Guard for the team drafts him. It may take a couple of years to get to know the League, and develop his game; but given Harden's obvious advanced Offensive skills, there's no doubt he'll be a quality player in the NBA.