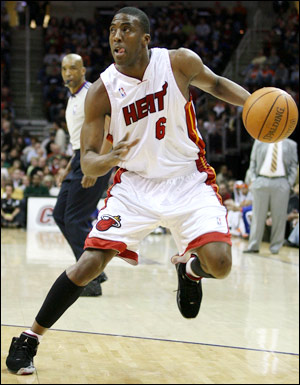 Key Links: (drop any others in the comments)
Peninsula is Mightier
Crazy From the Heat
Ira Winderman on the Heat
Game Day Heat
The Other Side: Miami

I don't know if you all see this as depressing or as a relief, but here's the schedule for the rest of the season:

Yep, that's it. Only 5 games stand between now and the end of the season and the start of what should be a very interesting off-season as we look forward to a potential lottery pick, a new head coach, and possibly the shedding of some deadweight contracts.

There's a lot of things to look forward to, but first let's get tonight out of the way. After hosting one MVP candidate on Thursday night, we get another tonight in the form of Dwyane Wade. If I had an MVP vote to cast, I'd vote for LeBron, but as a Wizards fan, I'm much more scared of facing D-Wade. In his career he's 20-2 against Washington, including a four-game sweep of the Wizards in 2004 Eastern Conference Semifinals. In fact, the only two losses he's had against us came last year when the Heat were 15-67 and while he was playing through injury.

Needless to say, I'm not feeling great about tonight's match-up, even if Gilbert and Brendan play tonight.

This is an open thread, so if you've ever fed Caron Butler for a sweet dunk, talk about it here.