Game Thread Comment of the Game: Yeah, there was 656 of those bad boys last night.  To pick one to stand out over all the rest would be a crime.

Let's get to the obligatory points that will curb our enthusiasm just a little bit, but need to be said, so that we can close this recap by hyping ourselves up again.

The first few minutes of last night's game were very ugly for Washington.  There was no rhythm on offense, the defense looked completely disjointed, and it looked like Cleveland was on their way to an easy win.  As I watched, I remember thinking to myself, "It looks like these guys haven't played basketball together."

Soon after that, I had another thought run through my mind: "Oh yeah, these guys haven't played basketball together."

It only took 77 games, but last night we finally got a glimpse of what this team is capable of when they can play their best starting lineup.  Once they got through their opening jitters in the first few minutes of the game, it seemed like they were able to pick up right where they left off before all of the injuries plagued this team. 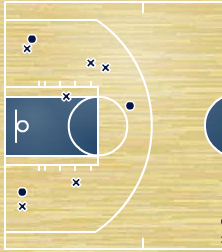 There's only one shot on that chart even remotely close to the paint.  When you can keep the opposing team's center from scoring inside, odds are you're going to have a good chance at winning the game.

The other key player making his return, Gilbert Arenas, had a major impact as well.  He still looks very hesitant at times out there, but even still, he's making quite the impact out there.  As has been mentioned by several media outlets today, Arenas currently has a 20:1 assist-to-turnover ratio for the season.  Let that sink in for a while.

Having Gilbert back does so much for this team, even when he's not scoring.  It alleviates Caron and Antawn of their playmaking duties, which allows them to focus more on getting effective shots.  Caron got to the line 11 times last night (and made all 11), something you didn't see a lot of with Gilbert out.  Antawn was able to hurt the Cavs with his inside game as usual, and he's able to use his speed more because he knows Gilbert can find him on those outlet passes where he can get easy points.

Other than adding pure talent, the return of Gilbert and Brendan also let players that have been out of position all year go back to their natural spots.  The players that most jumps to mind is Darius Songaila, who can finally go back to being power forward coming off the bench, rather than the team's starting center.  Going back to his normal role, Songaila didn't waste any time showing how good he can fill that role.  I think most people would agree he deserves the game ball for his 17 point, 6 rebound performance last night.

(On a side note, I think we finally have a nickname for Songaila.

Then he paused, started grinning and yelled out "THEN IT WAS THE WHITE KNIGHT! DARIUS SONGAILA, THE WHITE KNIGHT! BACK IN THE GAME! WHITE KNIGHT!!" Songaila sitting next to Haywood getting his shoes on and gave a fist pump and grinned. We actually saw a little emotion out of Darius in the fourth quarter. With the Wizards clinging to an 89-88 run, The White Knight -- as he's now been dubbed -- rose up, scoring seven of his team's nine points to help them gain a 94-88 cushion and force a Cleveland timeout. The whistle sounded as the Cavs called timeout following Songaila's strong take and score and with his teammates celebrating and the backup forward/center -- who finished with 17 points and six rebounds -- was rather demonstrative as he headed back to the huddle.

The first one to photoshop Songaila weaing a white Batman suit gets a cookie.)

Finally, I'd be remiss if I didn't mention the contributions from the young guys last night.  Dominic McGuire had an impressive all-around game, scoring 7 points, pulling in 10 rebounds, and getting 5 assists.  It was a little odd because his best asset (his defense) was off in my estimation, but he still had quite an impact last night.  I think playing in a Gilbert Arenas-paced game is going to wonders for Taser.

Nick Young also had a nice night, scoring 10 off the bench and getting a layup on a nice drive to the basket to put the game away for good.  JaVale McGee had an impressive swat and dunk in his limited time.  Andray Blatche was a little foul happy (4 hacks in 13 minutes) but he also had 4 points, 3 assists, and 2 rebounds.  Not bad, all in all.

At the end of the day, this is just one game at the end of a miserable season, but now the Wizards have something to build on as they get ready for next year.  I'm not going to go out and make some bold prediction about high the ceiling is for this team, because that would reckless with only one game of evidence.  But as we saw last night, this roster can compete with any team in the NBA on a given night.  With the right coach and the addition of a lottery pick this summer, to address some of their remaining issues, the Wizards could do a lot of damage next year.