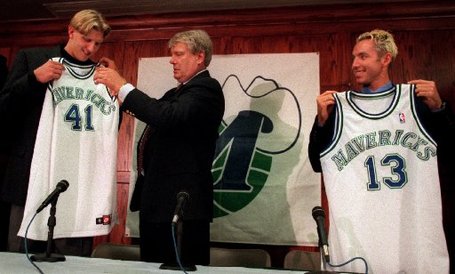 Key Links: (drop any others in the comments)
Mavs Moneyball
The Two Man Game (Mavericks)
Game Day Dallas
The Other Side: Mavericks

Haven't had a chance to see last night's game yet, but I get the feeling that I'll need to break out the antacids when I do. Losing by 22 to the Spurs isn't all that shocking, but losing to them by 22 while Tim Duncan only scores 5 points is a little tougher pill to swallow.

Tonight, we face another team with a very good power forward that's surrounded by a cast of three point shooters and very good point guard. On top of that, the Mavericks are still smarting over a blowout loss to the Hornets on national TV on Thursday night. So not only do we get to face a more talented team that gives us match-up problems, but they're angry too. This should be fun.

One thing to keep track of tonight is the play of Jose Juan Barea. His alma mater, Northeastern, is playing their CAA tournament game at the same time as tonight as the Wiz-Mavs game, so watch him while he's out on the court. If he struggles out there, there's a good chance that Northeastern is losing. I can't explain it, but there just seems to be a link between the performance of a university's basketball team and the performance of people who either go there or attended there at one point. I know for me, I just that I'll get very queasy this afternoon if George Mason loses to JMU. But that's neither here nor there.

This is an open thread, so if you want to break out in song, do it here.