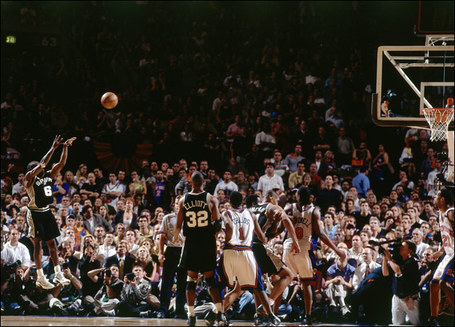 Key Links: (drop any others in the comments)
Pounding The Rock
48 Minutes of Hell
Game Day Spurs
The Other Side: San Antonio

Expect to see a lot of the above photo tonight. Just instead the team's (crosses fingers) future coach doing the damage, it will be the team's (kicks self in the leg, even though it was the right move...I think) former three-point specialist doing the damage. I could go into more detail, but I think you all are familiar enough with the team's penchant to give up wide open threes and have former teammates roast us that it's not worth the extra salt that I'll be pouring into everyone's wounds.

This is an open thread, so if you'd like to speculate that the Spurs signing DerMarr Johnson last week to their D-League affiliate is part of a bigger scheme to use every player let go by the Wizards against us, do it here.