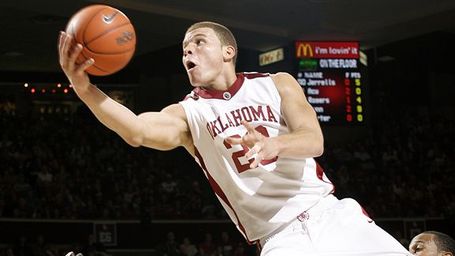 Key Links: (drop any others in the comments)
Welcome to Loud City
Daily Thunder
Blue Blitz
Game Day Oklahoma City
The Other Side: Hawks

Normally, the top photo in game thread posts is reserved for a former player of the team the Wizards are facing that night. Of course, the Thunder has a rich history from its days in Seattle, but I'd rather not open that can of worms here. I could always go with the dearly departed Joe Smith or Chris Wilcox (they show Terps less respect than Jeff Teague!) but I figured that would be too corny.

Instead, tonight's featured player for our game thread is the most coveted man in the state of Oklahoma: Blake Griffin. Both of the teams playing tonight have a good shot at getting the top pick this season and both of them would surely take the big man if given the opportunity.

I've jokingly called these matchups involving the Wizards, Thunder, Kings, Clippers, Grizzlies, and Timberwolves Lottery Bowl (insert number here) but I don't think you'll see either team going out there to lose tonight. Sure, there's only one, maybe two players that will be playing in tonight's game that could start for a team playing .500 basketball or better, but if anything, I think that supports my claim that we'll see both teams going out there with the intent of winning tonight.

Fighting for minutes on cellar-dwelling team in the NBA is like teetering on the edge of a cliff. Many of the players on both teams know that if they can't string together some good performances that they won't not have a job once thier contract runs out. Going up against another really bad team gives these players a chance to have that statement game that just might give them that extra resume boost the next time they go job hunting.

This is an open thread, so if you're still trying to figure out what exactly the Thunder's mascot is, speculate about it here.