It Was the Best of Times, It was the Worst of Times: Pistons 98, Wizards 96

Share All sharing options for: It Was the Best of Times, It was the Worst of Times: Pistons 98, Wizards 96 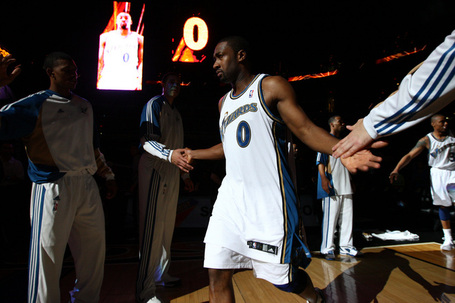 Game Thread Comment of the Game: "I was BEGGING Gil to take that shot.  USA USA USA!!!" by Truth About It in response to Arenas' first three point attempt of the game.

Other than seeing LeBron James take six steps to the hoop on a game-winning layup, watching Kwame Brown block a potential dagger from Gilbert Arenas is about as crushing as it gets.  Was there a foul on the play?  Maybe, although Gil said after the game that there wasn't a foul.  Did Gilbert rush the shot at the end?  Definitely.  It's one of those things that would've talked about for years if he'd made it, but the chances of that were incredibly low, even if Kwame hadn't blocked the shot.

I suppose you could've said the same thing about Caron Butler's decision to go for three against the Lakers at the buzzer instead of going for two and the tie.  In seasons like this, sometimes you just have to go for the jugular when you get the chance, even if it's not the highest percentage play available.

The ending was rough, but all in all I don't think you could've asked for much more from Gilbert's return.  His shooting touch was off, but it seemed like it was more a byproduct of rust from not playing than anything else.  He didn't seem to be hobbling around out there to me, but I think it will take more than the 4 games left on the schedule to get back into rhythm and return to the form we're familiar with.

It was also very nice to see how some of the other players on the team who haven't had a chance to play with Arenas that much, like Dominic McGuire, Nick Young, JaVale McGee and Javaris Crittenton fit in with Gilbert while he was on the court.  Last night we finally got to see how some of those pieces fit together now that the main cog is turning again.  It's amazing how the roster makes so much more sense when the Big 3 are all out there.

Even though the finish stunk, I think  we all got what we wanted to see out of last night's game.  Gilbert looked good, the players around him looked good, and at the end of the day Gilbert's presence didn't cost the Wiz any ping-pong balls last night.  You can't ask for much more than that at this point in the season.