Share All sharing options for: The End of Eras: Wizards 95, Bobcats 93 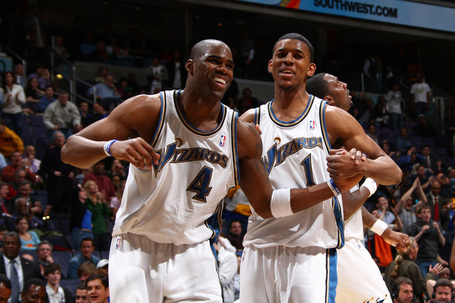 If the quickie recap sounded a bit ungrateful, I apologize.  After all, it's not like the Wizards win every day and there were several positives to come out of last night's game, but the closing minutes did not reflect the kind of performance we saw as the Wizards turned a 20 point deficit in the 2nd quarter into a 8 point lead halfway through the 4th.

But alas, the Wizards did pull out the win last night, which happened to coincide with the end of several eras in Wizards basketball.

The Dominic McGuire Scoreless Era: After 116 minutes without a point, Taser finally broke through with a tip shot with 2:05 left in the 3rd Quarter.  Like I said before, he's not here for his offense, but the occasional basket here and there is always welcome.

The Wizards Without Their Franchise Player Era: Last night was the last game before Gilbert's comeback on Saturday night.  I'm still on the fence as to whether or not it's the right move (though I'm leaning toward right move), but regardless of how you feel on the situation, it's going to be nice to see him on the court Saturday.  However, it will take a while for us all to reacquaint ourselves with what it's like to see him on the court.  Hopefully this will help jog some of your memories.

The Gilbert Arenas Blogging Era: It's not altogether shocking to see that he's hanging the keyboard up (he hasn't blogged in months), but it's still sad to see that Agent Zero's blog is no more.  In the end Gilbert was probably right in that blogging can end up being a two-edged sword that can work against you, especially if you're a famous athlete with a penchant for saying some pretty crazy stuff.  Steinz has a run up of some of Gilbert's best hits from '08 for those of you feeling nostalgic.

The Ivan Carter Era: Last night was the Washington Post beat man's last game before he makes the jump to Comcast SportsNet.  By all accounts, he's one of the best beat-writers in the business and his coverage of the Wiz will be sorely missed.  Then again, the job of beat writer for the Wizards at the Post has been a stepping stone to bigger things (just ask David Aldridge, J.A. Adande, and a few others that I can't seem to recall at the moment) so while we'll miss him covering the beat, I get the feeling that we'll still see plenty of him in the coming years.