Share All sharing options for: Links and Notables: Bulls 101, Wizards 99 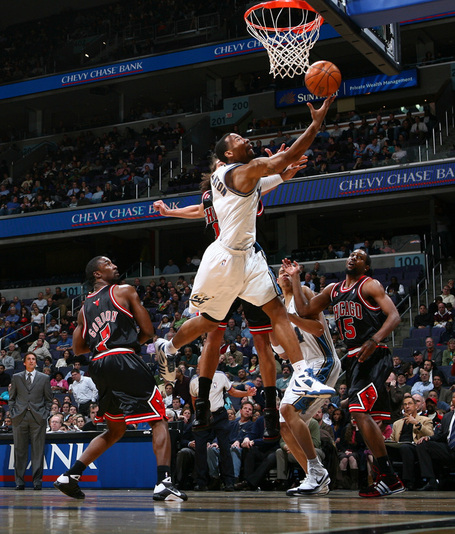 Game Thread Comment of the Game: It comes from an exchange between Buck and Phil regarding Oleksiy Pecherov during the 2nd Quarter. Buck: "Give him an open look and he’s got a good chance of making it." Phil: "He’s got a better chance of taking it." as transcribed by hibachi

There's been a lot of buzz in the blogosphere surrounding the Wiz lately, so rather than bombard you with FanShots, I figured I would try to incorporate them into the recap.

- Javaris Crittenton definitely had the best game of his young career last night, going for 18 points, 7 rebounds, and 5 assists in under 30 minutes last night.  It was exciting to see him playing very well against the best young point guard in the league, Derrick Rose.  On the other hand, I also couldn't shake knowing that as much as I like Critt, that he's no Derrick Rose and at some point Rose would show why he's just a notch better.  My fears were confirmed as Rose hit Kirk Hinrich with the assist for the game-winning layup.

- Normally with Andray Blatche, you can tell whether he's going to have a good game or a bad game by the third possession of the game.  It's hard to describe in words, but when you see him when he's on and when you see him when he's off you can see the difference rather clearly.  While he's still very Jekyll and Hyde at times, you don't normally see both sides of him in the same game like last night.  He came out of the gates very quickly and was a key part of why the Wizards were able to jump out to an early lead, but he faded very badly in the 2nd half and ended up watching as JaVale McGee took his minutes in crunch time.  Perhaps his poor conditioning was responsible for his performance in the 2nd half or maybe Chicago was doing something differently in the 2nd half to neutralize him, but there's a growing sentiment to do move him somewhere.

Stet Sports makes the case to trade him for Joakim Noah, which intrigues me, but I'm not sure Chicago would be interestted in making such a move.  More than at any other point, I get the feeling that Andray doesn't fit in the team's long term plans but I'm not sure what we could really expect back from other teams.  Personally, I still like him, but there's also a special place in my heart for those players who can amaze and baffle at the same time, so take that for what it's worth.

- Ivan Carter gives Mike James a C for his performance this season.  As much as I like to knock James, that's probably a fair grade.  It's not like he's underperforming expectations, he's just being asked to take on a role that he shouldn't be taking.

- G-Wiz has a Twitter (HT: The Bog).  Speaking of Steinz, he's got a nice piece up about the Wizards hosting a team from Kyrgyzstan that's worth your time to read, especially if you need something to make you feel good about rooting for the Wizards.

- You can find Kevin Broom's insights on the Wizards at a new site.  Update your bookmarks accordingly, because his insights should be required reading for any Wizards fan.

- The Wizznutzz have weighed in on the return of Gilbert Arenas in the way that only they can.

- Both the Post and the Times are reporting that no definitve decision has been made yet on whether or not Caron will be back in action tomorrow.  On one hand, Caron would give the team a better chance of getting that elusive divisional win against the Bobcats tomorrow night, but seeing Gilbert and Caron both return for the same game would be pretty awesome in its own right.