Share All sharing options for: Things Just Got Interesting 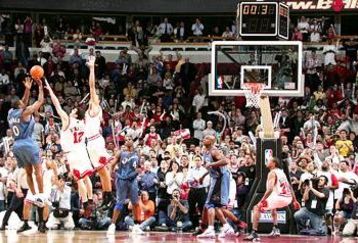 (The Wizards are playing the Bulls tonight, it seemed like a fitting photo.)

So the hot news today is that Gilbert will be back on Saturday.  My initial reaction is one of relief that at least we know what he's doing now.  Whether you agree or not with the decision is one thing, but at least now we don't have to speculate while we argue.  No more hypotheticals!

The two question I'm hearing the most in the wake of this news are:

As far as the lottery chances go, I don't think his presence hurt the team's chances all that much.  Assuming that Gilbert sticks to home games and the one road game against Cleveland, here's the games that he'll be participating in:

Of the five games on the list, the Toronto game is the only one that becomes a much more winnable game with Arenas on the court.  But even with that said, you have to remember that the team is likely going to be treating these games more like exhibitions than actual games as they try to see how he plays with guys like Javaris Crittenton whom he hasn't played with on the court yet.  Unless Gilbert sets the world on fire when he returns, I don't think he'll hurt the team's lottery chances that much.

Besides, as Prada pointed out, our lottery pick isn't the one getting the $111 million contract.  Wouldn't you sacrifice a few lottery balls to make sure that the franchise player is in working order?

Only time will tell the answer to the second question, but at least now we know that we won't have to wait all summer to get an answer.