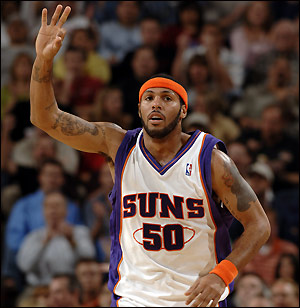 Key Links: (drop any others in the comments)
Bright Side of the Sun
Deep Purple
Valley of the Suns
Game Day Phoenix
The Other Side: Suns

There's been some talk as of late over at NBC Washington and at FanHouse about the decision by the Post and Times to not send the beat writers out on the team's latest road trip.

As a guy who loves the coverage from both papers, it's a little disappointing to be somewhat left in the dark about what's going on while the team has played out West, but I can't sit here and say that I don't understand why both papers decided not to send the beat reporters out to follow the team this week.

We all know the newspaper business wasn't in the best of financial conditions, even before the economic downturn. Teams that don't win many games tend not to draw in readership that will make the travel costs for beat writers worthwhile, especially in a town with the bandwagon reputation of Washington D.C. (save for the Redskins).

Besides, it's not like anyone was expecting the Wizards to set the world on fire during this road trip anyways. The Wizards are awful on the road and three of the four teams they're facing on this trip are right in the mix for the Western Conference playoff chase with no reason for a letdown game. The one team that the Wizards had a shot of beating (the Clippers) they ended up losing to by 15 points.

I don't know about the rest of you, but if you told me before this trip that the Wizards would've lost their first three games by an average of almost 14 points per game, watch Deron Williams toast everyone on the team, see Baron Davis dish out 20 assists, and cringe as J.R. Smith scores 40 points, I would probably tell you that's about what I was expecting and probably what everyone at both papers were expecting as well. Unless the Suns score 200 points tonight (don't count it out), they were probably justified in their decision to not send out reporters for this uneventful four game stretch trapped near the end of a season where most fans are looking forward to what happens in June rather than what happens on the court.

It's a tough break for those of us diehards who love digesting every bit of Wizards information we can get our hands on, but I don't think that it's something that the we'll have to get used to in the long-term. As the team and the economy improve, we'll once again see the kind of coverage that we've come to expect from both papers.

This is an open thread, so if you feel like a LETHAL WEAPON, talk about it here.