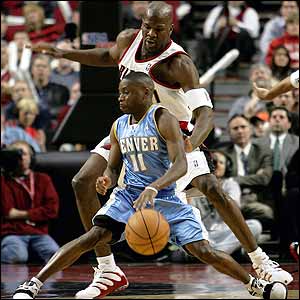 Key Links: (drop any others in the comments)
Pickaxe and Roll
Roundball Mining Company
Game Day Denver
The Other Side: Denver Nuggets

The Nuggets have won the last 4 games in this series by an average of 16.75 points and I don't see a whole lot of reason to believe the Nuggets won't win by a similar margin tonight. Caron is still listed as day-to-day so there's a chance that we could see him back in action tonight, but I wouldn't count on it. Even if he comes back it will likely only be to help keep the game a respectable blowout, rather than a flat-out embarrassing blowout.

This is an open thread, so if you have enough poison to kill an elephant, brag about it here.