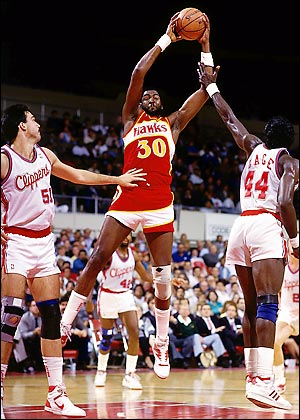 Key Links: (drop any others in the comments)
Peachtree Hoops
Hoopinion
Hawks BasketBlog
Sekou Smith
Game Day Atlanta
The Other Side: Hawks

Also: DeShawn Stevenson will undergo surgery on his back and is done for the year.

Tonight your Washington Wizards host the Atlanta Hawks for the last time this season. Like Saturday's contest against the Bucks, the Wizards will be trying to avoid a series sweep.

If you're a Wizards fan, you know the key to winning tonight: STOP THE ZAZA!

Let's review the reason why slowing down a backup center is critical to the Wizards' success tonight:

If the Wizards still have some semblance of a defensive gameplan, it needs to center around stopping Pachulia. If they can stop Joe Johnson and Josh Smith too, that would be nice, but the team's primary concern tonight has to be stopping the Zaza.

This is an open thread, so if you've ever bitten Danny Ainge's hand, talk about it here.