Dominic McGuire Makes Everything Better, as Long as He's on the Court: Clippers 123, Wizards 108

Share All sharing options for: Dominic McGuire Makes Everything Better, as Long as He's on the Court: Clippers 123, Wizards 108 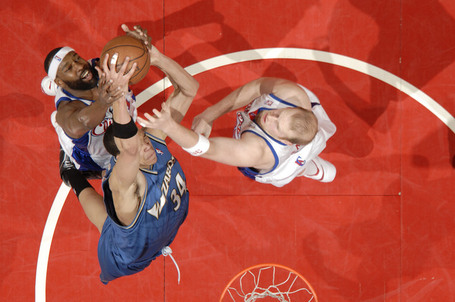 Game Thread Comment of the Game: "Um, guys?  With all of this high-flying, Pech may actually squeeze out an assist." by Pryme

Tweet of the Night: "A 90yo woman just did a split at center court. She's looks more athletic than @Baron_Davis tonight." by @jasonwoodmansee

Looking at the players with the highest and lowest +/- from last night, it would be easy to say that Dominic's hustle, defense, passing, and rebounding is what helped the Wizards play so well when he was on the court and Nick's shoot-first, skip the questions, and shoot again later mentality was the reason why the Wizards struggled while he was on the court.

It's the easy assumption to make, especially since their games are so diametrically opposed to each other and it makes for such a nice lesson to teach youngsters about how basketball is about more than scoring.  But as I watched this game, that's not what I was seeing before my eyes.  Young's statline certainly doesn't reflect what we're used to seeing when his struggles bring the team down.  He hit 7 of his 11 shots on the way to 18 points.  He certainly didn't shoot the team out of the game, and given that he only took 11 shots in 30 minutes, it's not like he disrupted the offensive flow of the game too much.

The only reason I can come up with for why Nick Young's +/- was so awful while Dominic McGuire's was so high is that Nick played less with Taser than anyone else on the team last night.  The only thing crazier than how much Dominic McGuire was helping everyone else out last night was that he was only rewarded with so little time in the 4th Quarter.

In the first three quarter the teams played to a tie.  In the nearly 27 minutes that he was on the court, the Wizards outscored the Clippers by 18, which means in the 5 minutes that he wasn't on the court, that the Wizards were outscored by 18.  Despite that, McGuire only played 1:11 in the final quarter and the Clippers ended up turning a game that was tied at the end of three quarters into a 15 point victory.  The saddest part is that in the 1:11 that he played in the 4th was the only positive stint of the quarter, where the Wizards finished +2.  In a season that's had its share of confusing player rotations, this may have been the most confusing to date.