Everyone is talking about Nick Young’s "mistake", collapsing in the lane to allow Garcia a look at a wide open 3…. that could have sent the game into Overtime. 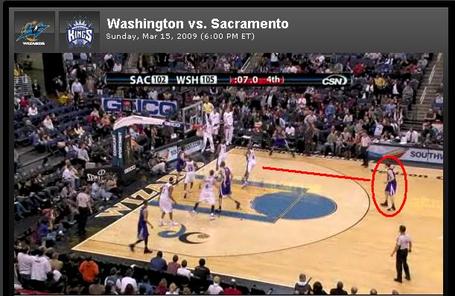 Let's go back and look at the recording of the game…. on the EXACT SAME PLAY, Nocioni was Jamison's assignment. Jamison collapsed into the lane to help on Udrih, leaving Nocioni wide open at the 3-point line….

You can watch the entire play here; it's at about the 1:50 mark.

Ivan Carter mentioned the play in the Wizards Insider asking Nick "what he was thinking" - but Ivan either didn't think to ask Jamison, or used selective journalism in printing only the Nick Young statement that he "had to help on Udrih." No mention in the Post of Jamison leaving Nocioni to help on Udrih.

After the game, Tapscott talked about the play briefly, saying that he didn't see the shot because he "was looking for the guy that got sucked in on the drive. I was saying something to him that I can't repeat." I can almost guarantee you he wasn't yelling at Jamison.

Had Udrih passed out to Nocioni (a better 3-point shooter than Garcia), I guarantee the Wizards Coaching staff would have been completely silent on the issue. Oh and by the way, there was a clear passing lane, so if Nick had stayed put, Nocioni would have been shooting that 3 pointer instead of Garcia………. AND, I’ll guarantee that IF we hear ANYTHING about that play from Tapscott today, it will all be about Nick Young (or a “young player”) making a mistake… and nothing about Jamison (or a "veteran") making the exact same mistake.

Well - I don't blame Nick Young for his defense on that play at all.

I keep getting back to the coaching on this kind of play. The ONLY Wizard that didn’t collapse into the lane when Udrih penetrated was McGuire – he stuck by Kevin Martin in the corner.