Brendan Haywood Back? Don't Count On It

Share All sharing options for: Brendan Haywood Back? Don't Count On It

I Mean Mug Therefore I Am 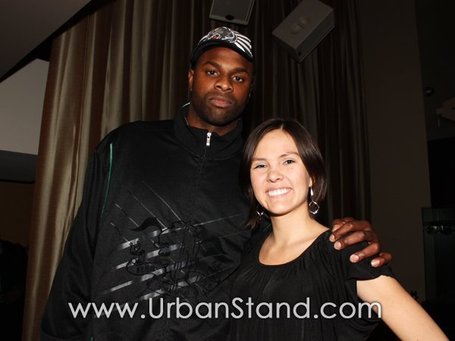 Smoke and mirrors from the Wizards? Surprise, surprise.

"That means it's possible, if not likely, that we'll see Haywood back on the court before the end of the season. Either that, or he's going to have to come up with a pretty good reason not to play," continued McMillan in the Wizards Insider update.

In Carter's follow up, he quoted Ed Tapscott being coy as they come about Haywood:

"He needs practices. You know, the guy hasn't played since October, so it would be unfair to do anything other than give him the requisite number of practice repetitions to get him back. It's not even like training camp where the guys normally play for a month and a half before they go into camp. He's somebody who hasn't played in five, six months, so he needs quite a bit of practice. So we'll just play it by ear."

The Bullets are forever in a P.I.B.E. situation.

In steps Mike Jones of the Washington Times:

Not exactly sure what the deal is with Brendan Haywood. His coach, and members of the Wizards P.R. staff say that he has been cleared to resume full contact activity. I grabbed him in the hallway tonight and he said, "I don't know anything about that. I don't know where that came from." Haywood wouldn't confirm or deny that he has had a checkup or received word that his wrist is good to go. But obviously, it has if Tapscott and members of the team's staff are saying so. So, either Haywood isn't confident in the wrist yet, or he doesn't want to risk attempting a comeback this season.

Slow your roll.....all the kids are doing it. Haywood's simple avoidance of the issue is a strong indicator, as Jones closes, that he won't be returning to the court this season.

What decreases Haywood's incentive to come back?

He'll be 29 making $6 million in the last year of his contract. He'll be more valuable (at least to himself) limiting risk and heading into '09-'10 fully healthy.

Also, a wrist ligament injury obviously isn't as physically limiting as say a knee, ankle, or even shoulder injury.

Unlike Gilbert Arenas, who needs every chance he can get to see what the court feels like before next season (assuming 100% health of course), Haywood can more easily get his game legs back during the summer and into training camp.

I honestly hope we see BTH in uniform, if not for five or so games. The chemistry the team may, or may not, build as a whole could help determine the next best coach.

But as signs indicate, don't get your hopes up. Expect impending cryptic answers from GM Ernie Grunfeld and just go with the flow.