Share All sharing options for: Steps in the Right Direction: Magic 112, Wizards 103 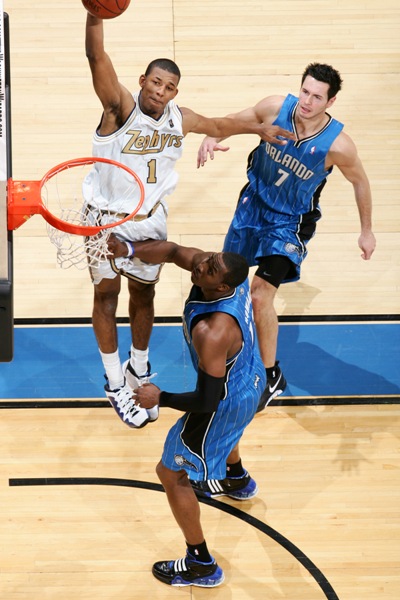 Whoever said the only thing that matters at the end of the day is the final score never blogged about a team that was 15-51.  Even though the Wizards lost last night, I'm excited about the minutes distributed to the young guys last night.  Check it out:

The injury to Caron Butler played a part in why some of those guys got extended minutes, but what impresses me the most is that Tap didn't go back to his veterans when it got to crunch time.  Win or lose, he was going to give the young guys a chance to learn what it's like playing the closing minutes of a competitive basketball game against an elite team.

In the end, the young guys came up short (good teams like Orlando tend to win close games against bad teams like Washington) but at least they were on the court.  At this point in the season, that's all that really matters.  The win-loss totals have long ago become a meaningless statistic to a team with no shot to achieve anything substantial this year.  Let's hope the final 16 games continue to focus on getting the young guys experience on the floor for next season.

It's still important to attach some value to the minutes being distributed to keep the young players.  Without that value, the young players could become complacent and expect those minutes to come their way, even if they're not doing anything to merit that time.  As important as it is to use the rest of the season to get these guys floor time, it does them nothing if it's not giving them incentive to improve their game.

On the other hand, that doesn't mean that the short leash that Tap has kept the young guys on should stick around either.  Part of the learning experience is going through some failures and learning what to do to avoid having those experiences again.  In the closing minutes, there were several things the young guys could've improved on that could've given them a victory last night.  Let's hope that they'll be eager to learn what they did wrong and what they can do to improve on that in the coming days.  Additionally, let's hope the coaching staff is just as eager to teach them and work with them on the practice floor, as well as during game time.