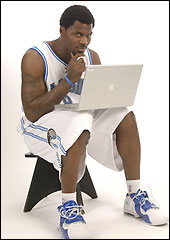 Key Links: (drop any others in the comments)
Third Quarter Collapse
Game Day Magic
The Other Side: Magic

Apologies on the lack of a recap on the Hornets game so far, I spent too much time on the photoshop (which I hope will be worth it) for the game and I didn't get the chance to write all the text to go with it. But It'll be coming down the pipeline, don't you worry. All I can tell you is this: I hope you enjoy Mike James being Dustin Hoffman.

On to tonight, we face another upper-echelon team with a brilliant young star in Dwight Howard. I'm not expecting a whole lot tonight because Howard is so dominant inside and the three point shooters that Orlando has put around him will get plenty of open looks tonight if I know the Wizards' defense like I think I do.

On the bright side, the Wizards played them well last time thanks to a magnificent performance by Caron Butler. That, plus the fact that the Magic will be without Jameer Nelson and Hedo Turkoglu is a game-time decision with a sore left foot. So there's certainly hope that the Wiz can make a competitive game out of this one, but I don't see much of a chance for a win tonight. But hey, Sacramento is coming to town Saturday.

This is an open thread, so if you like jumping while other people finish alley-oops, talk about it here.