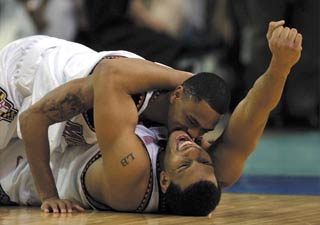 Who would've thought that these two guys would both end up being locked up one day?  Juan is effectively imprisoned on the Wizards' bench where he can't crack the rotation and Lonny Baxter was imprisoned...in prison.

Here at Bullets Forever, we try not to discriminate between different levels of hoops.  We enjoy a good college game just as much as we do a good pro game.  As such, one of the traditions of the site is to have a tourney pool every year to see how good we are with our bracketology.  It also gives us a chance to talk smack, which is always nice. (Fun fact: Last year Prada, Truth, and I all picked Davidson's upset of Georgetown.  Davidson over Wisconsin?  Not so much.  But 2 out of 3 ain't bad!)

Anyways, this year we'll be doing out brackets through Comcast Sportsnet, so head over there to register and then join the Bullets Forever Bracket Madness group to get in on the action.  As you'll see when you get over there, there are some prizes for the top finishers overall.  I'll also try to figure out some kind of sentimental award that costs me no money to produce or ship for the winner of our pool.

If you have an idea for an award, if you just want to blurt out who you think will cut down the nets in Detroit, here's the place to do it.  Once the brackets are finalized on Sunday night, I'll get an open thread going in the FanShots so we can discuss all the tournament action over the next few weeks.