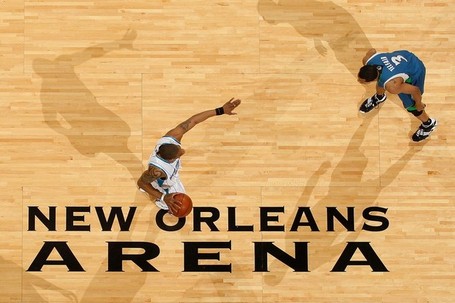 Key Links: (drop any others in the comments)
At the Hive
Hornets 24/7
Hornets Hype
Game Day Hornets

The floor general is back.

No, I'm not talking about Chris Paul.

Tonight is all about Antonio Daniels' return to D.C. after being traded for Mike James to open up enough salary room to bring on Javaris Crittenton. While there's certainly been an aesthetic downgrade from the pure-point style of Daniels to the "If I'm open, it's leaving my hands" style of Mike James, I still think it was worth it to get Javaris Crittenton, who I think can play a solid role on this team for years to come. Plus, there is one thing Mike James can bring to a team that Antonio Daniels can't: Durability.

We all saw how Daniels started to break down near the end of the year because of all the minutes he was logging while Gilbert was out of the lineup. He's not a starting-calibur player in this league, but James can take on a starter's load of minutes and not wear down as easily as Daniels did. In a lot of ways, the trade set both players back into the roles they should be cast in: Daniels gets to go back to being a solid back-up point guard on a winning team where he doesn't have to play a heavy load of minutes and James gets to play on a bad team where he gets 10 shots a night and fans are too depressed to make a big commotion about it. I think both players got what they wanted out of the trade.

This is an open thread, so recall your favorite Antonio Daniels memories here.