Oleksiy Pecherov is Having a Historic Season

Share All sharing options for: Oleksiy Pecherov is Having a Historic Season 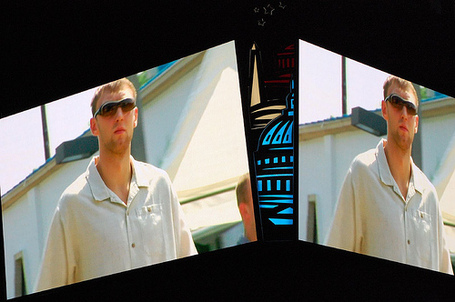 [Ed. Note: I misread the chart listing the players that have gone an entire season without an assist.  There are more than the 92 that I originally said in this post, but the assist-less season is still rare enough to merit special attention, in my opinion. -Jake]

A guy that averages 7.8 minutes per game and has only played in 21 games this season probably doesn't strike you as a guy that could be having a historic season. Yet when you check the stats, you'll realize that Oleksiy is closing in on something that very few players have ever done: Going an entire season without recording an assist.. (HT: pantslessyoda1)

As you look through the records of players who have gone entire seasons without recording an assists, you'll notice a trend of players who didn't get much playing time.  Of all the assist-less seasons in NBA history, only 13 of them have involved players getting more than 100 minutes of playing time, but a 14th could be added if Pecherov can keep his assist total at 0 for the final 18 games of the season.

If his season ended today, he'd have logged the 4th most minutes in NBA history without recording a single assist and he only needs 7 more minutes to pass Mouhamed Sene's 2006-07 season for 3rd.  Unless Pecherov can average 26 minutes a game for the last 18 games of the season, Yinka Dare's record for the longest season without an assist will remain in tact, but if he can go the rest of the season without a dish to a teammate, he will secure his place in history and live up to his creed of "I get buckets (and only buckets), son."