There Have Been More Exciting Games in NBA History: Wizards 110, Timberwolves 99

Share All sharing options for: There Have Been More Exciting Games in NBA History: Wizards 110, Timberwolves 99 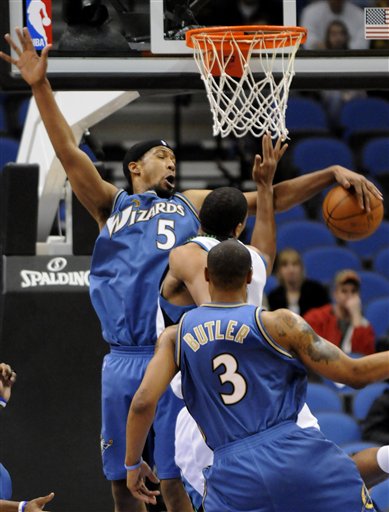 Game Thread Comment of the Game: "His career has been fascinating.  I want to see Ricky Gervais make some kind of biopic about him." by pantslessyoda1 in regards to Kwame Brown.

The fact that Kwame Brown biopics were being discussed during the game should give you an idea of what kind of game was being played last night.  It wasn't a sloppy game (both teams only had 10 turnovers) and it wasn't a game of offensive ineptitude (9 players reached double-digits) there was just nothing at all notable about the game.

Caron Butler led the way with 27 points and 10 rebounds, again showing that there's no lingering effects from his hip injury.  Darius Songaila had arguably his best game of the season, scoring 19 points on 8-9 shooting and grabbing six rebounds in the process.

Those were the two main cogs in last night's win.  Antawn Jamison had an uncharacterisitically off-night, despite what his 26 points would indicate.  He only grabbed 4 rebounds and had 3 turnovers in the win.  The Wizards certainly couldn't have won without his contributions last night, but he wasn't as big of a factor in the win last night as he has been in other wins this season.

I'd also be remiss if I didn't mention Juan Dixon's performance last night.  With Mike James sidelined with the flu, Juan Dixon came in and had a very solid performance last night with 9 points, 6 rebounds, and 4 assists.  We've been a little tough on Dixon this year, but it's certainly hasn't been because of his effort.  Every now and then there are just some games where both teams can get caught going through the motions and if you can bring someone in that will go all out, it can change the dynamic of the game or at least change the tone of if.  Dixon has done that a few times this season and last night's game was one of the finer examples of Dixon coming in and carrying out that role.