Notes and Notables From an Otherwise Unnoteworthy Game: Bucks 109, Wizards 93

Share All sharing options for: Notes and Notables From an Otherwise Unnoteworthy Game: Bucks 109, Wizards 93 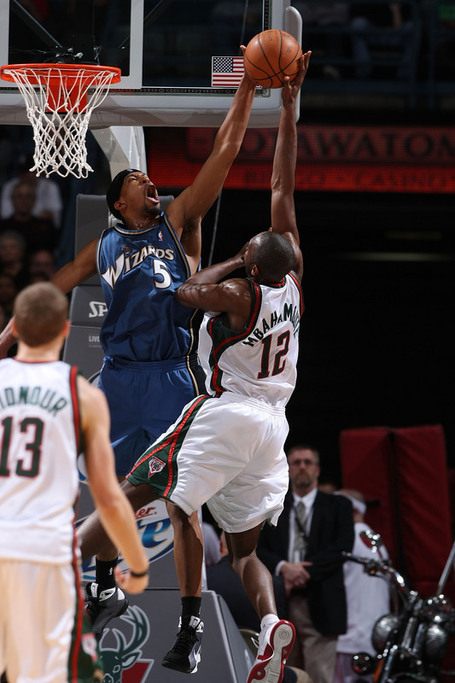 Game Thread Comment of the Game: "After two minutes Juan Dixon has a team-high two assists.  The Mike James experience, everyone." by Jon L.

- Darius Songaila, Andray Blatche, and JaVale McGee combined for 6 rebounds last night.  Not for a quarter, not for a half, that was their total for the entire game.  It's hard to win games when your three centers combine for 5 less rebounds than Dan Gadzuric.

• F Oleksiy Pecherov is starting to sound despondent about his limited playing time.

"I'm frustrated because I thought by now I would be getting more time and starting to show what I can do by now. It is not happening," he said.

• G Juan Dixon also said that he should be getting more time.

"I don't know what the problem is," Dixon said. "If what you're trying isn't working, than you have to try something new."

I think what Juan is forgetting is that in November and December he was given several chances to make his case for playing time and he just couldn't do it.  He's even gotten the chance to start six games this season and he never really did anything to separate himself from the pack.  Maybe I could see him being brought in from time to time to come in for Mike James when he's not playing well, but at this point in the season those minutes need to be going to Javaris Crittenton.

It has to be rough for Juan knowing that this might be his last chance to play in the NBA and he's not getting consistent minutes, but I don't think he has a leg to stand on here.  On the bright side, he was able to get some extended playing time tonight with Crittenton out with the flu tonight.  I don't think it did much to help his case for more playing time, but we'll see what happens.

As for Pech, he might have a little better case to argue because he can give the team some rebounding (which the team was sorely lacking at the center position last night) and he can stretch the defense with his range like Songaila, but there just isn't a lot of playing time at the 4 and 5 spot that's open for the taking.

Dixon and Pecherov are both players with strong work ethics that the team seems to like, but sadly, you can't just reward playing time on work ethic.  At some point, on-court production has to count for something and they just haven't brought enough of that to justify more playing time.

- I spent some time in the Bulls recap praising Dominic McGuire's efforts over the last few weeks but last night was not one of his better performances.  Richard Jefferson was running him ragged off screens and he was a non-factor on the glass.  His 3 blocks (including the one featured in the Photo of the Night) were very nice, but that's the only meaningful contribution he had tonight.