Share All sharing options for: Change Wizards Fans Can Believe In: Wizards 113, Bulls 90 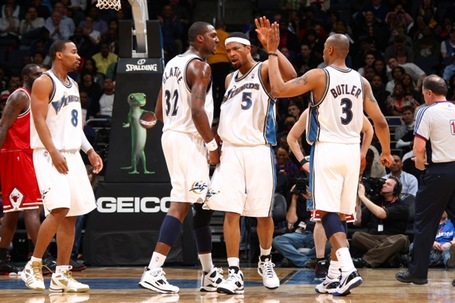 Game Thread Comment of the Game: "Executive Order #4362: JaVale McGee must stay in the game." by morethesamewiz

So that's what the team plays like when there's a crowd.

Maybe that's a little over dramatic, but there was certainly a buzz in the Phone Booth last night.  I think it might've had something to do with that guy in the front row, maybe he should get some season tickets on the house.

Of course, the extra hype surrounding last night's game wasn't the real reason behind the Wizards' performance last night.  Like any good win, one of the keys to tonight's game was balance.  Eight players scored in double digits and seven players had at least 2 assists.

Part of Washington's unusually high offensive efficiency had to do with Chicago's lack of cohesiveness.  They're still trying to incorporate John Salmons and Bran Miller into the flow and old players are working their way into new roles.  Let's also not forget that they were playing with heavy hearts after the deaths of Johnny Kerr and Norm Van Lier.

Still, it's one thing to have an opportunity and another thing to actually take advantage of it.  Unlike some of the opportunities that they've been given this year, the Wizards were able to capitalize tonight thanks to some solid defense of the Bulls backcourt.  Derrick Rose and Ben Gordon combined to 7-27 from the field with 5 assists and 6 turnovers.  The Wizards have struggled all year to keep guards from running wild against them, but they did an excellent job tonight against one of the better tandems in the East.

The other big key to the win was rebounding.  Jamison as always was a key part of that effort, snagging 11 boards including 5 on the offensive end.  The other big contributor was Dominic McGuire who had his fourth double-digit rebounding effort in 5 games.  He's been getting more attention for his play over the last few weeks from the writers and the announcers and the praise is well-deserved.

I know it's tempting for people on the outside to look in and just assume that he's an anonymous scrub logging minutes on a bad team, but Taser is going to still be a part of this rotation even after this team gets healthy again.  Even if he never becomes a decent scorer, he's still a guy that can slow a guy down defensively and crash the boards at an excellent rate for a small forward.  He'll stick around in this league for a little while.