The dreaded Sardine defense - or (shhhhh) the Conga Line defense

Share All sharing options for: The dreaded Sardine defense - or (shhhhh) the Conga Line defense

I know I've shown a play like this before, but I wanted to illustrate this play for two reasons: Number one, it demonstrates and solidifies my theory that the Wizards standard defense is to pack the lane. They consistently sag into the lane. It happens over and over again - so it must be a learned (Coached) skill.  And number two, it shows that sometimes Nick Young gets unfairly criticized for his defense.

At the end of this play, the ESPN announcer said, and I quote:

"Nick Young didn't even bother to step out on him, and Smith knocks down the J." 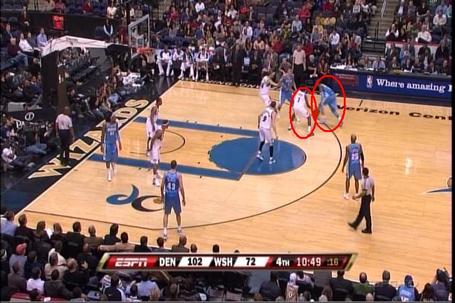 Young cuts him off in the lane. 5 Wizards are in the paint. Smith passes out to Kleiza (43) at the 3-point line. McGuire, who was IN THE PAINT, scrambles out to defend. 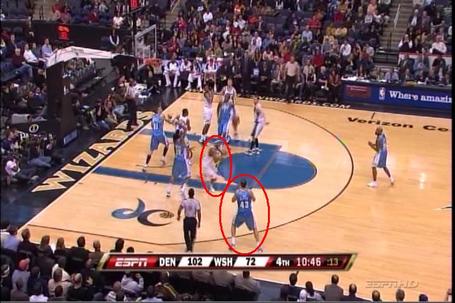 Kleiza drives past McGuire into the paint. Nick Young steps in to stop him. If you look closely, you can see Kleiza passing the ball, and at the same time, he drops what looks like a sticky substance on the floor..... ? Very Suspicious. 5 Wizards are in or very near the paint. 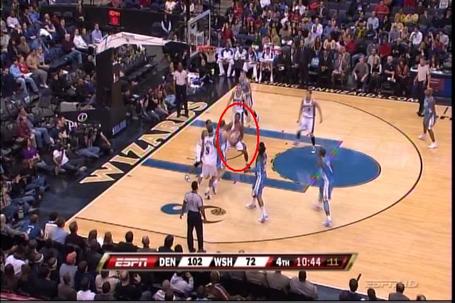 This next one is an interesting, and revealing snapshot of the Wizards defense.

Kleiza passes out to Billups at the 3-point line. Songaila, who was IN THE PAINT, scrambles to defend. Meantime, JR Smith fades back out to the 3-point line on the other wing. Young is sticking with Kleiza in the lane. Crittenton and McGuire are guarding NOBODY down in the lane apparently glued to the floor. Remember that substance?  5 Wizards are packed in the lane. This is apparently the STANDARD Wizards defense whenever ANYONE penetrates the paint. I'm going to start calling this the "Sardine" defense. 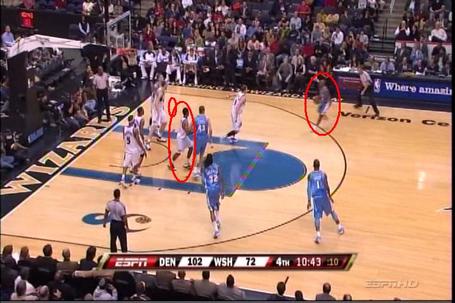 A pass from Billups to JR Smith. Young, who is now apparently guarding 3 guys, tries to close out, while McGuire and Crittenton are still stuck in glue by the baseline. (Or maybe Assistant Coach Randy Ayres has come up with a new, Super Secret  Conga Line defense ).... 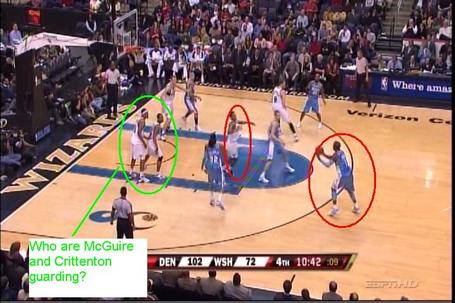 Young is too far away, as he comes from the middle of the lane , out to the 3-point line. (Note: From picture #4 to #6 is a total of 2 seconds; so Young went from the middle of the lane, to the defend the 3-point line in 2 seconds)........... Smith pump fakes - ..... Young, is moving too fast and is unable to stop. He sails by. Meanwhile, McGuire and Crittenton, are STILL trying to get their sneakers unstuck from that glue. Crit's got one foot loose. 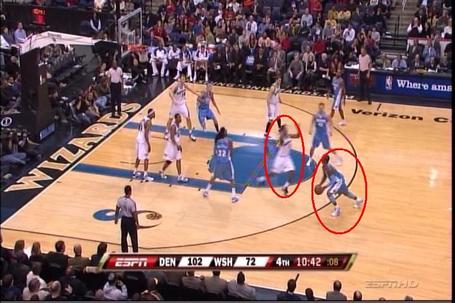 Smith takes one dribble left, and is open for a long 2-point shot. Pech has his roller skates on, and is getting ready to "drop the elbow" (sorry, that reference to Roller Derby probably went by most people)... McGuire has not moved 2 feet in the entire sequence. 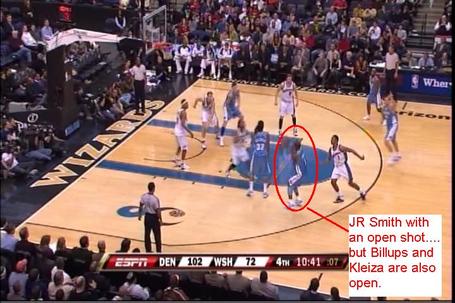 Maybe he was looking at some stats, or another game monitor or something, but this is when the ESPN guy said Nick Young "didn't even bother to step out".....

In my observation, Nick played pretty solid defense on that play. At least , it's my opinion that he hustled. He certainly wasn't just standing around allowing Smith to take an uncontested shot, as the National announcers reported. He closed out on the 3-point shooter - on the side of his shooting hand, rather than straight on; LIKE YOU'RE SUPPOSED TO. If you look at the sequence again, you can see that Nick Young is the only defender that actually moved more than a foot or two during most of the play.