These are times that build a fan's character: Nuggets 124, Wizards 103

Share All sharing options for: These are times that build a fan's character: Nuggets 124, Wizards 103 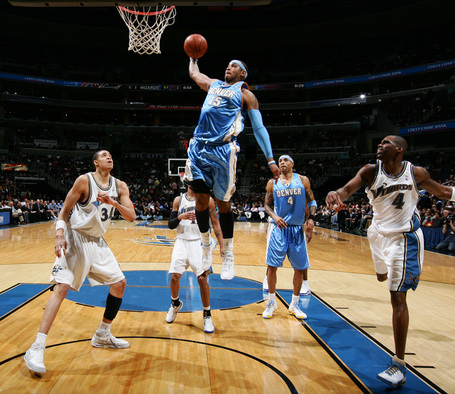 And don't worry, if you didn't like this photo, there are plenty more pictures of Nuggets dunking last night that you can choose from.

Game Thread Comment of the Night: "He's going to get a tat of a tat on a tat." by Truth About It regarding Chris Andersen's next tattoo.

You know what's great about being a Wizards fan?  No bandwagoners.  If you watch this team, it's because you love the sport of basketball and you love the team that plays it in the nation's capital.  When you're 10-40, love of the team and love of the sport are the only things that'll keep you coming back for more, even when you know the outcome was decided...long ago.

That's why last night I spent time watching a replay of the game (well half of it, it was getting late and I figured the second half was more or less like the first), even though I knew that they were going to lose by 21, give up 14 dunks, and look like they had no business being on the court in terms of talent or effort.

Maybe it's just me, but even when the Wizards are absolutely awful like they were last night, I still get a kick out of watching them when they play.  It might be a little painful at times, but I've found that it's easier to keep watching then it is to change the channel.  Making it through times like this will make it that much more rewarding once things back around.