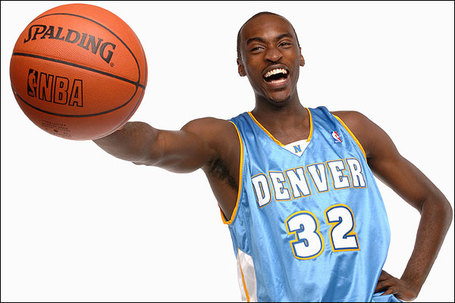 UPDATE: As expected, no Butler or Stevenson. Juan Dixon will be able to play.

Last year when these two teams tangled at the Phone Booth on a game televised by ESPN, the Nuggets thumped the Wizards by 26. The team looked awful, the fans booed, and the Wizards found themselves staring at an 0-5 record. That game would prove to be the turning point in the season as the Wizards reeled off six straight wins and after that point never left the playoff discussion.

Except for the whole using-this-game-a-catalyst-to-get-back-in-the-playoff-hunt, thsi game could very well turn out to be a lot like last year's game. People will rightfully be scared of Chauncey Billups because of how he's helped that team this season, and they'll rightfully be scared of Carmelo Anthony because he's an outstanding player, but the one to watch out for tonight is Nené.

Just about every low post player is a threat against us, but the Brazillian can really wreak some havoc against the Wizards' front line. Nené's size negates Songaila's ability use to use his bulk to keep him off the blocks and body him up and JaVale's only hope in stopping him is that maybe he can block some of his shots early and get into his head. If neither of those things happen, the Wizards better hope that they can get him in foul trouble, because that's probably the only way they stand a chance in this one.

This is an open thread, so if you had to cut your hair because you lost a video game, you can talk about it here.