Share All sharing options for: More than a mascot: Nets 115, Wizards 88 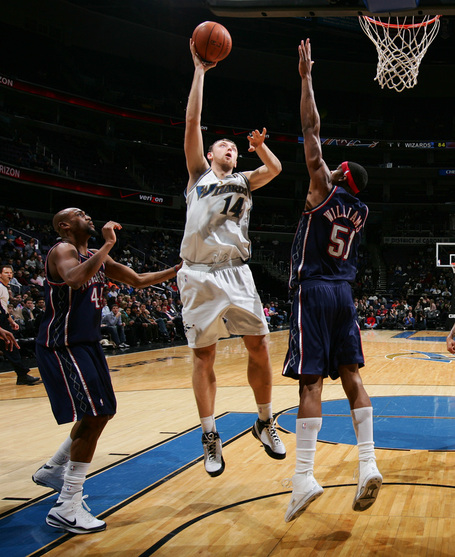 Game Thread Comment of the Night: "It's 'Get Nachos, Son' night. Every time Pech scores a 3, someone in the crowd gets free nachos." by Aldo.

There's two ways I could've gone with this recap.

Since games where Oleksiy Pecherov plays over 20 minutes are far rarer than games where the Wizards play well even though they have no chance of winning, let's focus on O-Pec's performance last night.

Most of what we've seen of Pecherov has come from his shining moments in garbage time where he stays parked around the 3 point line to get his buckets, son.  He's a tall guy, but he's not exactly what you'd consider a low post presence most of the time.  Of the 167 shots that Pecherov has attempted as a pro, 81 (48.5%) have come from behind the arc.  By comparison, J.J. Redick attempts exactly half of his field goals from behind the arc, a difference of 1.5%.

Yesterday for the first time we really got to see him work inside and he was surprisingly effective in his forays into the paint.  Six of his nine field goal attempts were two-pointers and he made four of them.  A few of those came on put backs, but he also had a nice hook shot as well as a nice score after grabbing a missed free throw and scoring during their big 2nd Quarter run.  We always knew that he could get buckets, but seeing him do it in the fashion that he did it last night was a first.

It would probably surprise you to learn that Pecherov has the highest rebounding rate on the team this year.  Sure, that's probably a bit skewed by a small sample size, but it still gives you the idea that he's a much better rebounder than his frame and playing style would suggest.  The thing that he's really impressed me with this season is his offensive rebounding numbers.  Right now, he's rocking an offensive rebound percentage of 17.3%.  If he had enough minutes to qualify, that would be the highest rate in the league this season.

Again, those numbers are a bit skewed by not logging heavy minutes, but hopefully it serves as a reminder that Oleksiy Pecherov isn't just Manute Bol on skates when he's on the court either.  His greatest skill will always be getting buckets. but I think that he'll be able to use this time to show that he can get other stuff too, son.