Share All sharing options for: Game Changer: The Birth of Devin Harris 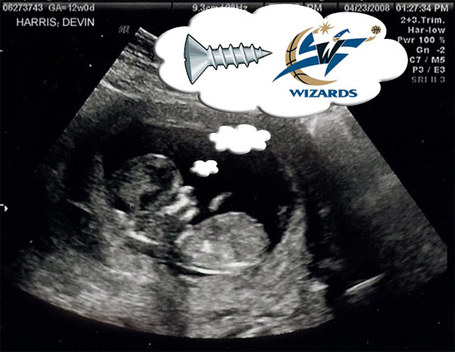 Ok, in all fairness, Devin Harris has torched plenty of teams this year....that's why he's an All-Star. And the Wizards, well, we already know they were working with a losing equation before the numbers were crunched.

But don't make it easy on the guy. His finally tally of 26 points wasn't astounding, but he did have 19 at the half. Many times, Mike James was looking like a prime candidate for the next episode Crappy Defender 911.

So tonight's game changer is the birth of Devin Harris. He grew up to be drafted and immediately traded by the Wizards....and that probably gives him just a bit of extra motivation.

The first one was Willie Green's 16 points in the first quarter last Friday against Philly. The second was a big Nick Young bucket in the win against the Clippers.

For the Memphis game, I was just going to take a screen shot of the jump ball and put thought bubbles containing pictures of ice cream cones, tropical islands, etc. over the heads of the Wizards -- I know, silly, zinger style.

However, my DVR started randomly erasing Wizards games -- guess he's tired of containing all the suckiness inside.

At this point, I would just like to request that ESPN not show this Friday's game against the Nuggets. To be on national television at this point is an insult to NBA fans, Wizards fans, and the nation of basketball alike.