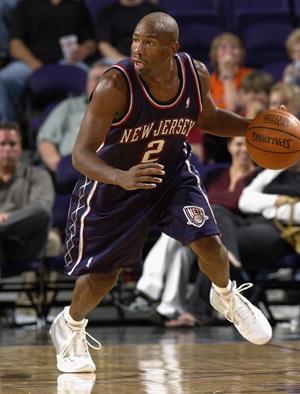 Key Links: (drop any others in the comments)
NetsDaily
Nets Blast
In The 'Zzone
Nets Insider
Game Day New Jersey

There are minutes at guard to be had: It looks like both Juan Dixon and DeShawn Stevenson will be out for tonight's game with injuries, which translates to more playing time for Nick Young and Javaris Crittenton tonight.

[UPDATE] Looks like Caron Butler will be out as well....with the flu. I'm going to the game (Truth)...this should be "fun" -- hope they don't have any forks where I'm sitting, stabbing myself in the eye might bring the same about of joy. Carry on.

Even though Crittenton has an eFG& of 17.9% on jump shots (!!!) he's been a nice addition for this team, especially as of late. Earning over 19 minutes of playing time in his last three outings has to make you think that he's begun to earn Ed Tapscott's trust. I'm not exactly sure when the next 7 game stint starts, but it will be might interesting to see if Javaris gets a chance to start when the next stint starts.

He'll need to have a good game tonight, but in all honestly, everyone is going to have to play their best tonight against New Jersey. All-Star Devin Harris and Vince Carter combine to form what's arguably the best backcourt tandem in the NBA. They'll have to find a way to slow them down (hopefully by trying to stay between them and the basket, I've heard that can be effective) or match them punch for punch if they want a shot to win tonight.

N-O W-I-Z-A-R-D-S W-I-L-L B-E I-N-V-I-T-E-D T-O T-H-I-S E-I-T-H-E-R: You may have heard by now that a H-O-R-S-E competition is going to be added to the All-Star weekend festivities. We probably won't see any Wizard participating since none of them were invited to participate in anything happening in Phoenix next weekend. But the event did get me thinking about which Wizard would do the best in a team wide competition. Gilbert would be the obvious favorite, given his wild imagination and his increbible range.

I'm tempted to say Jamison would probably end up second, but I'm not sure how well his funky scoop shot would translate in that setting. If the scoop shot is too easy without a defender to increase the degree of difficulty, I'd probably go with Nick Young. I could see him busting out some funky looking shots that would be hard to replicate. Especially if he attempted those shots in Michael Jackson outfit.

Just because: Here's a video of Brook Lopez trying on a female reporter's jacket.

This is an open thread, so use it to hope with all your might that this doesn't become Jarvis Hayes' revenge game.