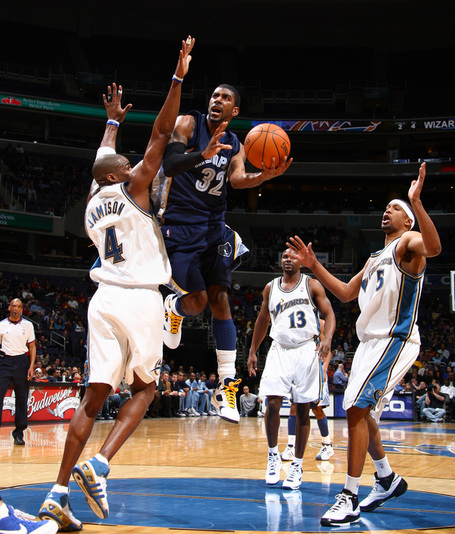 Game Thread Comment of the Night: "Why so serious Pech?" by Icantfeelmyface in response to Rook's observation that Oleksiy Pecherov had not yet attempted a three-pointer.

There's not a whole lot that I can add to what's already been said about the Wizards effort or lack thereof last night.  The Wizards played like a team that was satisfied with their rare win on Saturday and decided to take the night off to celebrate.  The Grizzlies saw a team on the schedule that they knew they had a chance to beat and came out and played like a team that wanted to end their 12 game losing streak.  That was the difference last night.

In a perfect world, the teams with the worst records would be the hardest working teams because the fear of being the worst team is one of the most powerful incentives to play hard that's known to man.  Sadly, attest to the fact that we don't live in a perfect world.  Losing leads to discouragement, discouragement leads to hopelessness, players without hope don't give their all because they don't see the point, and if you see the point, odds are you're going to lose more.  It's a vicious cycle.

There will be times during the year when the team breaks the cycle (like Saturday night), but for the most part this is going to be the cycle that the Wizards are going to be stuck in for the rest of the year.  More times that not, the cycle won't produce games as sloppy as the one you saw last night -- Tap will make sure of that -- but just because Wizards will end up keeping games closer more often doesn't mean that the cycle has been broken.  Only some health, a long off-season, and a high draft pick will be able to do that job.