Something many Bullets Forever members have harped on before is the Wizard's dreadful perimeter defense.

To make matters worse, the Wizards attempt only 15.7 field goals from beyond the arc, and make only 32.2% (5 per game) - Since they make an average of only 5 per game, and the opponents make 8.3 per game, the Wizards, are starting EVERY game knowing they have to make up 10 points - just in 3-point differential.

Earlier in the season, I thought that the loss of Haywood, combined with having poor interior and perimeter defenders (Jamison, Thomas, Young, Mike James, etc.) was the reason the Wizards couldn't close out on perimeter shooters. But after watching all year, I've come to the conclusion that it's, at least partly, the defensive scheme that is to blame in a lot of instances.

The following screen shots from the Memphis game will illustrate my point.

In this first screen shot, you can see the Wizards are in pretty good position to defend. The floor is balanced. Everyone has a man. 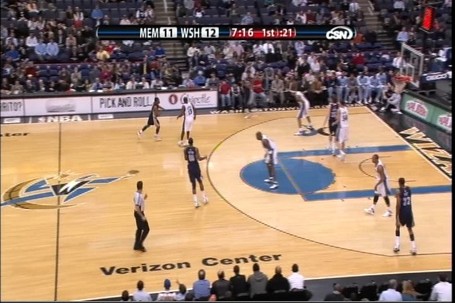 As Memphis gets into their set play, Jamison is following his man into the corner. McGuire (headband at the left elbow) is in position to challenge Mayo if the ball is passed to him. Gasol is attempting to get position down low using a Darrell Arthur pick. Songaila is trying to muscle him out. Conley has the ball at the 3-point line, checked by Crittenton. 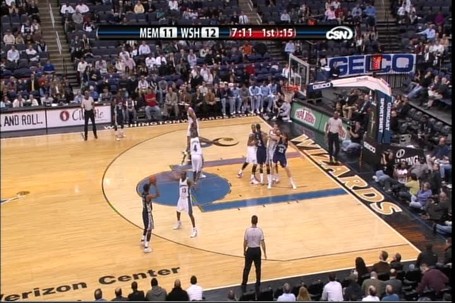 As the ball is passed into Gasol, McGuire turns his head to watch the play. Gasol makes his move to the baseline; but McGee has good position, and has his arms up. McGuire is still close enough to Mayo to close out effectively. Crittenton is on Conley. Even Jamison and Caron are in good defensive position.  Basically, if everything stays that way, the Wizards might give up a tough, contested 2-point shot to Gasol. 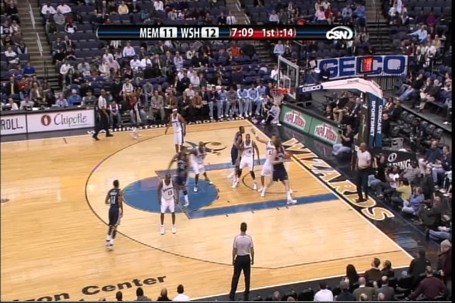 But instead, all 5 Wizard defenders collapse into the lane; including McGuire and Crittenton, the two main perimeter defenders on this play. All 5 Wizards have at least one foot touching the lane. Meantime, during the entire play, O. J. Mayo has been sliding further along the sideline towards the baseline. Something McGuire has not noticed, with his head turned. Now, there are 3 Memphis players that are open for a perimeter shot. 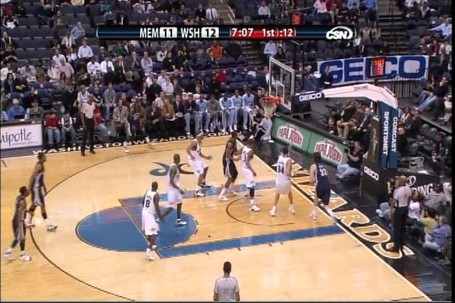 The result? Gasol passes to an open O.J. Mayo for a 3-point shot, as McGuire cannot get there in time to contest. But it just as easily could have been an open shot for Conley or Rudy Gay. 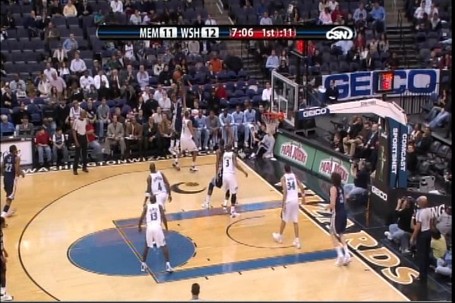 Now I understand that a good team can get open shots by crisply moving the ball around, until they get a shot. It's very difficult to keep a good passing team from getting a clean look. They will keep swinging the ball around until someone pops open. But, that's not what I'm talking about here. In this case, and in many many many other cases this year, there was the entry pass, then a kick out to a wide open shooter. A wide open shot created only because the Wizards players are collapsing in the lane.

So why is this not McGuire's fault?

Because it happens every game. Every time the ball is passed into the low post, the Wizards collapse. Every time.