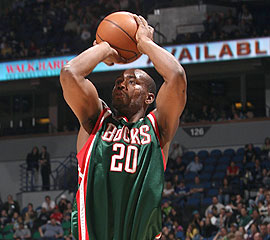 Key Links: (drop any others in the comments)
Brew Hoop
The Bratwurst
Bucks Blog
Bucks Diary
Game Day Milwaukee
The Other Side: Bucks

By all accounts, last night's game was one of the most entertaining games of the season, if not the most. I would say so with more assurance had I gotten the chance to see the game yet. At some point soon and provide a recap, but right now we need to re-focus because we've got ourselves another game tonight.

As you can see with tonight's starting lineups, there are quite a few players out with injuries tonight. A lineup with Gilbert Arenas, Michael Redd, DeShawn Stevenson, Andrew Bogut, and Brendan Haywood could do a lot of damage; instead, they'll all be wearing suits for tonight's game. The beloved Bango is out with a knee injury as well, so if you think that the injury bug only strikes the players in uniform, you would be wrong.

If the injury bug strikes again tonight, you'd have to assume it would go straight for Wisconsin native Caron Butler. Last year, Caron suffered a hip injury here that sidelined him for a month and two years ago Milwaukee was the place where he broke his hand late in the season. If the coaching staff decided to give Caron the night off, I wouldn't fault them one bit.

This is an open thread, so talk about Nick Young's regrettable hair cut here.