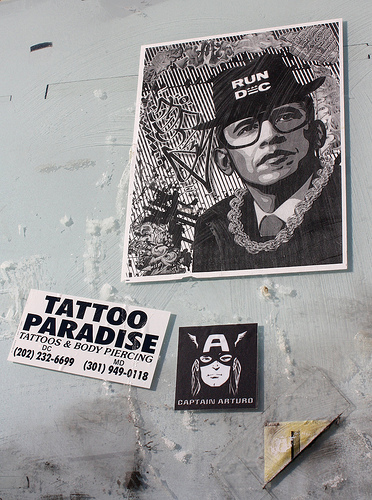 Delay of game? Well, everyone is looking for the Pres who's not yet in the house. The refs are all but ready to toss the jump ball, but send the teams back to their corners. Makes sense to wait. Tapscott gives a smile....everyone seems loose, but anxious.

Wiz start out with a spring in their step, including a long Dom McGuire jumper just inside the three point line....space courtesy of a screen and aggressive roll by Jamison.....to put the Wiz up 8-2 at the 9:30 mark.

8:10: Gawd....we can only dream. Yes, the Wiz missed two threes on this possession, which ultimately ended with a Caron Butler mid-ranger on a third chance, but it was the quick ball movement and the effort on the two offensive boards that we've been craving more of. 12-2 Wiz.

6:00: Steve Buckhantz is interested to see if the Wizards can keep up the frenetic pace on offense.

1:27: Blatche and a bald-headed-banded Nick Young make the first subs for McGuire and Songaila....and Crittenton for James about a minute later.

0:18: Nick Young drives and hits a very tough fading shot, but I must admit cringing at how much he dribbled the ball on that possession. The Wizards started the game moving the rock so well, why not keep that up? 27-16 Wizards.

And the first ends 27-18 after two late Chicago FTs with 0.9 seconds left after a silly foul. The Bulls actually ended the 1st on an 8-2 run. Jamison had 13 points, Wiz have 9 second chance points as a team.

9:21: Working the ball around a little better.....get the ball to Young on the wing who's really working hard to post up Ben Gordon. Young hits a very tough turn-around fader and gets the foul -- 3 point play -- Young has the last 7 points for DC -- 32-21 Wizards.

7:30: Steve Buckhantz calls the Wizards out for not being as patient on offense as they were in the 1st quarter -- looking for a difference between the vets and the youth? -- Bulls go on a 6-0 run, Tapscott calls a timeout. 34-27 DC.

5:45: Wiz pressure....D-Song swarms the loose ball.....slings it up to McGee who makes a crafty layup avoiding the D on the break.....and then salutes the POTUS.

How can Joakim Noah be an NBA player and have a completely crappy FT form release?

3:40: Pecherov...Big Oily is making an appearance....good stuff, matching up against Noah.

McGee salutes after some FTs....looks to be a planned theme.

Big Oily Watch: Tyrus Thomas throws down a monster slam on him.....something about Stewie and the Bulls .

1:30: Amazing oop from Butler to McGee who is able to contort, catch and throw it down with one hand.....and another salute. 49-42 Wizards.

8:55: The President evidently returns from visiting ol' Abe Pollin as D-Mac throws down a two-hand put-back jam....cheers all around.

2:29: D-Mac making the Bulls pay with a baseline jumper that's on the verge of becoming automatic. 77-67 Wiz.

1:51: Jamison gets his promised dunk for Obama. AJ made a back-cut on Deng, received a well timed pass from McGuire and threw down a reverse flush.

1:31: OMG! A close to text book block out of Brad Miller from Andray Blatche.

Well, Hinrich nails a trey at the buzzer to make the game 83-74 Wiz after three.....Obama openly cheers and nods his head for this.....not very partisan Mr. President.

11:34: Sorry Tim Thomas...Dom McGuire has perfect timing to send you sh*t back from where it came.

11:11: And apologies should also be made to Brad Miller.....after receiving a nice pass from Andray Blatche, the Taser will dunk it with nuts in your mouth (And 1)

Butler, Blatche, McGuire, Young and Crittenton....and this crew has been working hard....pushes the lead to 11 points with 9 minutes left.

8:00: Andray with a right-to-left between the legs cross and lefty lay-in over Brad Miller....kept his head up on the dribble that time. 94-82 Wiz.

Effort and energy are the operative words from Phil Chenier and Steve Buckhantz. Well Wizards....you know that Obama lives in DC....just about 10 blocks away.....no reason for you to not bring effort and energy on a more consistent basis.

1:16: WOW! Pecherov passes up a three attempt....throws a pump fake....a single dribble.....and then nails a two pointer. Talk about growing up.