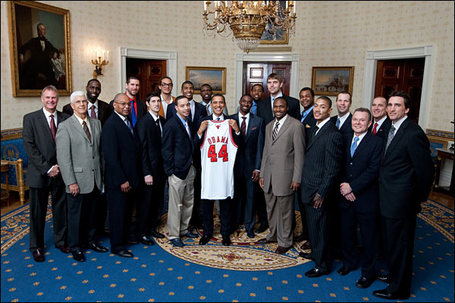 Key Links: (drop any others in the comments)
Blog-A-Bull
By The Horns
Game Day Chicago
The Other Side: Bulls

I know you'll be rooting for the Bulls tonight. You're a Chicago guy and you want to show your support for the new team. I get that. But as I'm sure you're well aware, you have a new address. Why not adopt your new home team as your own? I mean, it's not like these guys didn't help you on your way to 1600 Pennsylvania Avenue.

Who helped you out with your 3-on-3 basketball tourney in Indiana? Calbert Cheaney!

Who stumped for you just days before you won the election? Etan Thomas!

Who got a tattoo to commemorate your victory? Gilbert Arenas!

These men supported you when you needed it the most. Now at a time when things look bleak for the Wizards, they need your support. Would it be too much to ask to wear a Gilbert Arenas jersey tonight?

P.S. If you're still not going to root for the Wizards, could you at least send down an executive order so we can win the lottery this year? Thanks.

This is an open thread, so comment on the historic nature of having two black presidents in the same building at the same time.