Share All sharing options for: Sometimes, One Play Says It All: Sixers 106, Wizards 98 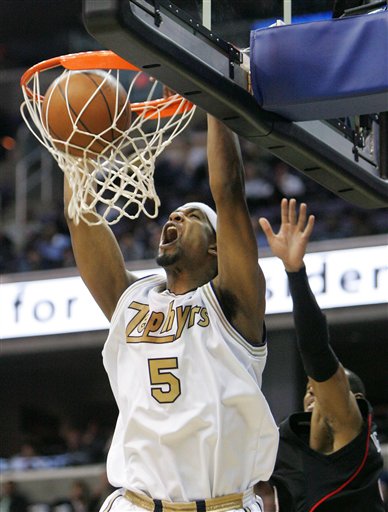 Game Thread Comment of the Game: "At this pace the Wiz will crack 80 tonight.  I think they need to speed things up." by Pryme

As awesome Andray and JaVale's fast break was, the defining play of last night's game came in the 3rd Quarter.  If you saw the game, you know exactly what I'm talking about.  If you didn't see the game, this sequence will tell you all that you need to know about the abysmal 3rd Quarter that cost the Wizards the game last night.

It's funny, because as I was watching last night, I can remember thinking that because the Wizards came out firing to start the game, that they'd probably come out with a flat start to the 3rd.  This team just can't seem to put together two nice starts to any half this season, but I guess that's what you would expect from a team that's only 13-44.

Even though they wasn't able to make up the deficit, I like the fight the team showed in the 4th Quarter.  No one would've faulted them for packing it in after going down 15 on that gut shot from Iguodala, but the team did a good job of fighting back in the closing seconds to make it close.  It would've been nice to see that kind of effort for all 48 minutes, but I'll take that small victory.

The one thing that left me a bit confused about last night's game was how the team went away from Antawn Jamison after a very good 1st Quarter.  Thaddeus Young just didn't seem to have any answer for Jamison, as he went off for 9 points on 4 of 6 shooting, including this baseline jam.  After he got his requisite 2nd Quarter breather the team never seemed to get him back into the groove, which was a shame because he was really doing some damage and forcing a very good defense to account for his presence.