Defensive Stills From the Spurs Game and Tapscott's Office

Share All sharing options for: Defensive Stills From the Spurs Game and Tapscott's Office

I'm not an advocate of Ed Tapscott by any means. In fact, I've been outwardly critical of him at times -- essentially, in my humble opinion (IMHO for you kids), Eddie Jordan shouldn't have been fired. Tapscott, while the former director of player development, has hindered the development of the team as a whole....again, IMO.

That being said, the guy was dealt a very tough hand and an unenviable task. And in turn, sometimes we need to take a step back and look at his job in perspective.

Rook made some great points in his 'Getting called into the Principal's office' post. However, maybe Coach Tap being a little bit harder on the mistakes of the rookies than those of the veterans isn't such a bad thing.

For one, none of us see how practices are conducted and we are not privy to conversations in the locker room, in the coach's office, etc.. We don't know exactly what Tapscott was purportedly mad about when he called Young, Crittenton, Pechrov and McGee into his office.....or if he was mad at all.

Something tells me that just maybe he is giving the veterans a pass because of all the injuries -- but whether you agree with that possibility or not isn't the point.

Perhaps when it comes to the young guys, Tapscott expects them to play with more focus, with a more consistent effort (something not necessarily measured by stats or amount of time on the court), and essentially, when they are given the opportunity to play together, usually when the Wiz are down by a lot, to act like the score is 0-0 and the game is on the line.

I didn't pay complete attention to that last eight or so minutes of the Spurs game, but it was easy to see that the rookies didn't play like any of us would have hoped they would.

And remember, as the great Richard Belding once said, you can't spell 'principal' without the letters P-A-L. And hopefully, that's the message Tapscott ultimately sends to the Wizards youth, that he's there to help -- it's just that none of us are exactly comfortable with the results of this so-called help.

Separately, here are some defensive stills and explanations from the game.

Here, Darius Songaila hedged out high on the pick set by Tim Duncan. Thing is, Duncan only held the pick for a second and then slipped the screen -- Dom McGuire could have easily stayed with Roger Mason. Songaila left himself way too high to quickly recover, nor did he have his hands in the passing lane deterring the ball's ultimate destination, the hands of Matt Bonner. 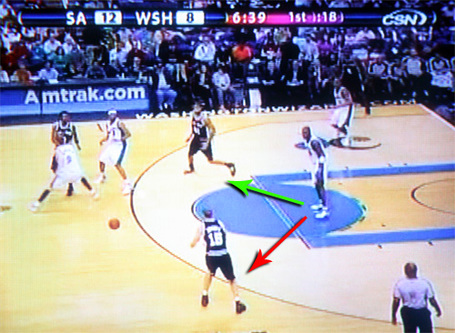 I can't blame Jamison for picking up a cutting Duncan. Although, just maybe he picks up Bonner, Butler comes to get Duncan from the corner....but still, the corner man will still be left wide open for the skip pass.

Any way you slice it, the Spurs are an excellent passing team.

I'm not going to argue with the strategy of doubling off the ball screen too much, just as long as the Wiz aren't creating bad defensive spacing -- which clearly happened here as Bonner nailed the open trey. 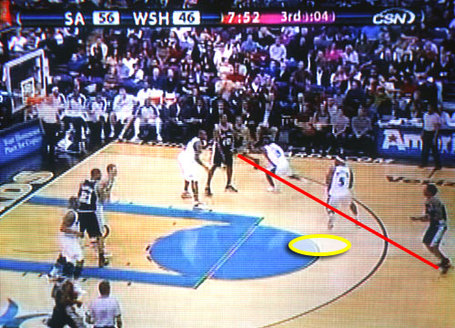 This instance is simple. Dominic McGuire turned his back on Roger Mason who slowly floated to the top of the key -- gotta see the ball and the man. Dom should be a step below that passing lane right in the yellow circle. If he were there, he'd be in the position to make the steal or better recover to Mason...who ended up nailing the shot. 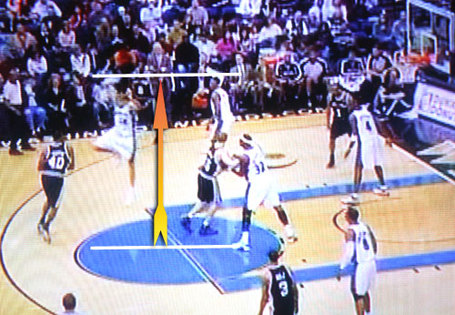 Kid's got jets, just needs to conserve the boosters. 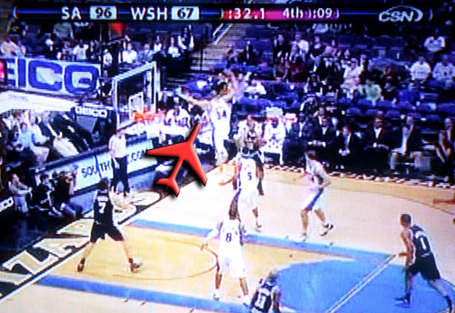 I guess we can blame that bird for taking Dominic McGuire away. 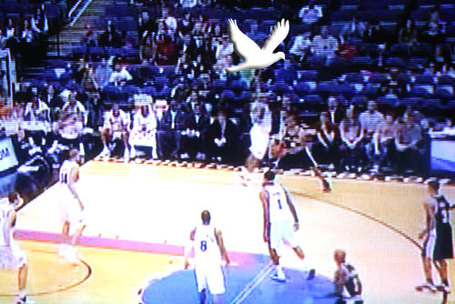