Share All sharing options for: Let's Never Speak of This Again: Spurs 98, Wizards 67 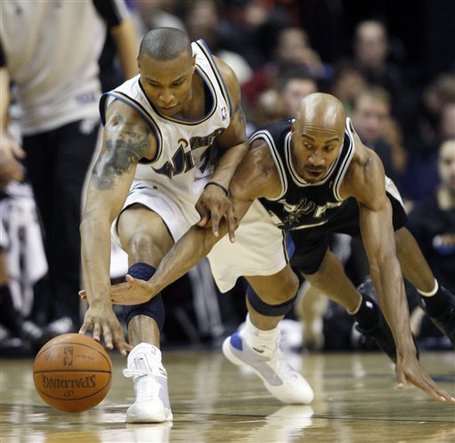 - Yesterday was a busy day fro me so I didn't really get a chance to make the case that letting Roger Mason Jr. go this off-season was still the right move, even though he's having a tremendous year and and the Wizards are having anything but a tremendous year.

Sure, his outside shooting would be a nice asset to have right now, but he simply wouldn't be getting the quality looks that he's getting in San Antonio because Washington doesn't have anyone that consistently draw people into the post and the team lacks a penetrator that can force the defense to move around and allow Roger to find open spots to shoot.  He'd certainly make the team better than it is right now, but the reality is that you just can't keep talent around for the sake of keeping talent.  At the end of the day Roger just didn't fit financially or with the rotation of the future.

I'm going to be rooting for Roger in the playoffs this year like most of you will, but I still think Ernie made the right move here, even if the early returns don't show that.  Remember when some people thought that trading JC Navarro was the wrong move after he went for 28 in his first game against the Wizards?  Roger probably won't end up in Spain at the end of the year like Navarro did, but I think we can learn a lesson from that experience about jumping to quick conclusions on personnel moves.  Let's wait and see how Nick Young and Javaris Crittenton (who probably wouldn't be here if Mason was still on the team) develop and see how Gilbert Arenas is when he comes back before we say that letting Roger Mason go was a bad move.

- With all of that said about waiting out the development of some of the younger players comes the understanding that there are going to be some peaks and valleys in their development.  Case in point:

It took Ed Tapscott about 15 minutes to come out and address the media. After speaking to the team he had Nick Young, Javaris Crittenton, JaVale McGee and Oleksiy Pecherov in his office, "getting in somebody's butt hole," according to Antawn Jamison.

That won't get them the keys to the Palace of Good Play anytime soon.

- In the 4th Quarter, the Wizards only scored 10 points.  Call me cynical, but I think if Tapscott would've just let Mike James take the ball up court and fire away from halfcourt on each possession in that final quarter that he would've made at least 4 shots, which would've been good for 12 points.  Maybe I'm crazy.