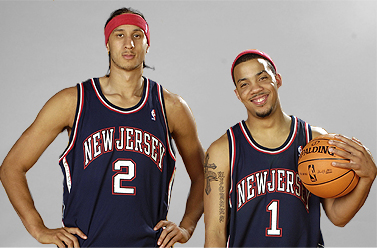 Key Links: (drop any others in the comments)
NetsDaily
Nets Blast
In The 'Zzone
Nets Insider
Game Day New Jersey

With yesterday's lack of activity, the team has locked itself into one of two paths with wildly different PR ramifications. You and I both know what kind of firestorm will unleash itself if the team trades away/sells off its lottery pick to get under the luxury tax.

However, if Pollin decides to bite the bullet and pay the tax, he would be lauded in most circles for going against the grain and committing more money into the team in the face of a recession and down year for the team. Until the team can get healthy and produce at a high level, there will still be those that criticize him for spending that money in a poor fashion, but if he keeps the trio in tact, and keeps this year's draft pick, any perceptions of Abe Pollin being a cheapskate owner (which I've never agreed with) will go out the window once and for all.

Now, if Abe does decide to go over the tax, don't expect that decision to usher in an era of exorbitant spending. He'll do what it takes to keep from making a move strictly for financial reasons, but I wouldn't expect him to start bringing on unnecessary salary. Going over the tax also doesn't mean that Mike James and Etan Thomas still won't be moved to provide some financial relief.

On to tonight's game, we face the New Jersey Nets, a team that's always given the team problems. They've already played three times, so you should be fairly familiar with their roster and how they use it to beat us..

The last time these two met, Steve Buckhantz said that Nets coach Lawrence Frank bore a resemblance to the one and only Bobby Hill. Judge for yourselves:

This is an open thread, so if watching the Wizards take on the Nets makes you happier than Brook Lopez at a comic book convention, jump for joy here.