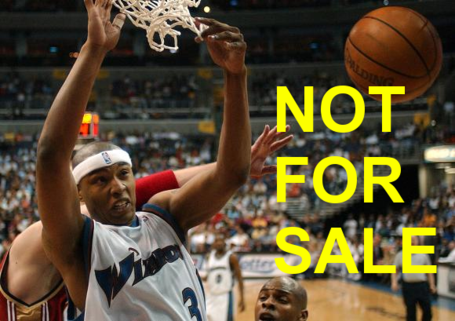 For me, trade deadline day is one of the most exciting days of the year.  There's so much stuff to talk about and so little time to get to all of it.

The last few years, I've known going into this day that the Wizards weren't going to figure in to trade talks, but this year things are a bit different.  The Antawn-for-Wally trade talk seems to have cooled off, but there's still going to be some offers for Ernie Grunfeld to look at.

The newest rumor sounds a lot like the one that we've heard many times before in the past:

It was about a week ago that someone told me that a Larry Hughes for Etan Thomas and Mike James swap may not go down until the last minute as the Bulls look for better deals for Hughes. The trade deadline is tomorrow at 3 p.m.

If that's the case, then I get the feeling that we'll see Larry Hughes in a Wizards uniform tomorrow.  I don't see why any other team would try to make a deal for Hughes unless it was part of some big swap like the one he was involved in last year at this time. {UPDATE: Well I'm an idiot, the Knicks might be trying to acquire Larry as well.]  Hughes wouldn't fix the team's cap issues, but I think the hope would be that he could revitalize what's left of his career back in D.C.  At worst, it's a nothing for nothing move.

Over at FanHouse, Tom Ziller makes the case for trading Jamison or Butler to save the lottery pick.  Here's the crux of his argument:

Jamison, strong as he is, will make $50 million over the next three seasons. You'd save roughly $14 million total in the attached bad contract salary by trading the top pick. A No. 3 pick will make less than $13 million over the same three-year span. So basically, keeping Jamison over the pick (and bad contract) costs $23 million. And you go from a decent shot at having a homegrown star from the Class of '09 to having zero shot at a homegrown star from the Class of '09. It does not make sense to trade the pick just to save Jamison.

Couldn't have said it much better myself.  But lest you think that Ziller is just getting on his soapbox to make arguments on my behalf, think again.  Over at Sactown Royalty, he throws out his proposal to take advantage of our little predicament.  His proposal would send Bobby Jackson's expiring contract to Washington for Etan Thomas and the team's lottery pick.  I'd like to see us get Sacto's pick that they got from Houston in the Ron Artest trade, but all in all, that's probably not a bad deal if that's what the team is planning to do.  My other idea would be to send Etan + the lottery pick to Minnesota for Jason Collins' expiring contract and the first round pick that Minnesota got from Miami in the Ricky Davis trade.  Neither deal would have me jumping for joy but they might be the best options on the table given the situation.

So that's where we're at right now.  At the end of the day, I think we'll end up staying put (or just trading for Larry Hughes, which essentially staying put with a familiar face), but it's crazy how things can develop in those closing hours and minutes before the deadline.  I've got classes tomorrow until after the deadline passes, so I won't be able to comment on anything that goes on until after the dust has settled, but until then, here's your chance to comment on today's happenings.