Share All sharing options for: Thumbs Up: Wizards Game 54 Blog vs. Minnesota T'Wolves 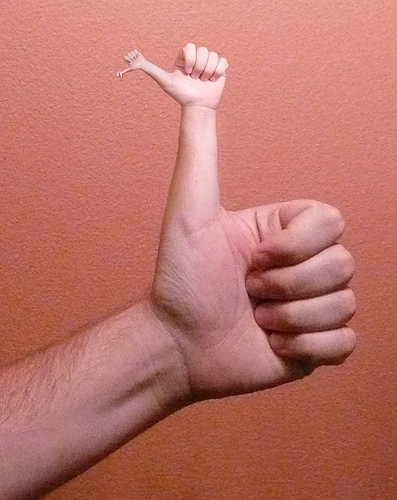 The good news: we may get a peek at Andray Blatche tonight. As a professed Blatche hater (well, not really), I'm really pulling for a strong showing for the rest of the season.

Well, the first shot is by Mike James, an open three set up by minor penetration....and he makes it. How 'bout that?

9:00: Wiz get a steal....Butler and Jamison run the break....Antawn misses a tough shot, but there's Dominic McGuire, doing a great job running the floor with the follow. 7-2 DC.

6:30: The Wiz only have 12 points for far (Minny with 7) but I really like the way they're moving the ball -- I'm seeing dribble penetration and a pass....or quick passes after a pass to get the D moving.

First time seeing Kevin Love in an NBA setting. He's a bigger body than I thought....almost an opposite hour glass shape -- 6 boards so far with 4:30 left in the first.

Huh, Mark Madsen is still in the league? Remember how he was the "Mad Dog" at Stanford?

Aaaaand it looks like JaVale McGee has gone Mohawk on us.....or as least an abnormally high fade. He looks like Lance Corporal Hal Dawson from A Few Good Men.

You gotta love the change of pace that Crittenton provides when he comes in the game.....the type of guy who can just grab a rebound and go.

0:35: Case in point: McGee help-side block, McGuire recover, gets to the ball to Javaris in the middle who jets and passes to AJ who draws a foul. 25-14 Wiz.

Chris Miller and Phil Chenier exchange words on the fresh legs of the Wizards.

9:27: Wow...one of the better moves I've seen McGee make -- corner left wing against Love.....faces up....jabs baseline and dribbles right into the paint....uses his length to get towards the hoop, and his arms to get a long sweeping scoop shot at the rim and over Love. 33-19 Wiz.

7:00: Crittenton again with a good dribble in traffic and leaves the ball for Andray with a running for a dunk. In general, Andray looks a little ginger when running, but he's hustling. Wiz up 16.

(Shhhh....don't tell anyone, but this team looks fun to watch)

You have to wonder about the purpose of Mike James now.......warm body?

Wiz are playing really well, but they still need to do a better job of taking care of the ball - a bit careless a couple times.

0:55: "Amazing how the wheels can come off for a team so quickly" says Steve Buckhantz....another turnover and move points prompts Tapscott to call a timeout. Lead down to 7, 47-40 Wizards. -- Hey, what did we expect?

For the record: 1 turnover in the first quarter, and the Wiz just committed their 9th of the 2nd quarter (illegal screen by McGee - his 3rd foul).

JEEZ....the Wiz were up NINETEEN with 3:38 left and are now only up 5 with 35 seconds left. (and another turnover....Crittenton with too much dribbling).

Wiz would get a tech FT (Telfair) and a Blatche bucket to go into the locker room up 51-42.

These teams like each other a lot....very cordial, always helping each other up, etc.

Nick Young has been relatively quite this game.....only a single point to speak of.

Songaila is bodying up against the HUGE Craig Smith and draws a back-down 5 second call -- haven't seen that all year, if ever.

Two times the Wiz try to force the ball to a cutting Butler....and both times a turnover - 18 total turnovers, waaaaay too much.

0:28: Wiz get the ball back...Crittenton drive....Mike James in the corner. TREY BALL! Pecherov does some sort of dance onto the court at the team goes into the timeout. 105-101 Wiz.

Bad News: Butler leaves the game early to go to the locker room......he might have hurt something getting a board before the last James three.