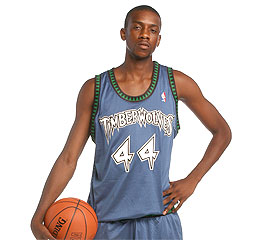 This year:This is the first match-up between the two this season.

Key Links: (drop any others in the comments)
Canis Hoopus
T-Wolves Blog
On the Ball
Game Day Minnesota
The Other Side: Timberwolves

First of all, big thanks to Prada for his post on all the trade discussions that have been going on lately. I don't have a whole lot to add to what he put forth there, but I'd encourage everyone to checkout Craig from WFNY's take on the trade from Cleveland's perspective, as well as the comments from fans on both sides of the issue. Ultimately, I think Cleveland will end up deciding that they'd rather have that extra cap space to give LeBron more freedom to bring in the guys that he wants in 2010, but I've been wrong on this kind of stuff before.

My gut is telling me that we won't see any moves before the deadline but we'll definitely see some things start to happen around draft time. I'm trying to talk myself into liking a deal where we'd trade down to the mid-to-late first round, dump a bad salary and pick up DeJuan Blair. He wouldn't be as nice as Blake Griffin, but he would help fix some of the teams problems and as much as we like to dream about seeing Griffin in D.C., we have to remember that even if the Wizards finish dead last, they only have a 25% chance of getting the top pick.

On to tonight's game, the Wizards are facing off against another struggling team that's dealing with injuries. Since Kevin McHale took over as coach, the team has shown considerable improvement, although most of that is for naught now that Al Jefferson has been lost for the season. Still, they've got some good young players that are starting to come into form, which you'll see tonight. It almost makes you wonder if maybe McHale's problem isn't evaluating players, it's evaluating coaches. However, the picture at the top of the post would refute that idea.

The player that's likely to burn the Wizards the most tonight is Kevin Love, who's currently rocking an offensive rebounding rate of 16.5, good enough to lead the league this season. For some context, Charles Barkley only had one season with an offensive rebounding percentage higher than what Kevin Love has right now as a 20 year old in his first year in the NBA. He should have a field day tonight against the Wizards.

This is an open thread, so try to correctly Ndudi Ebi's name in the comments.