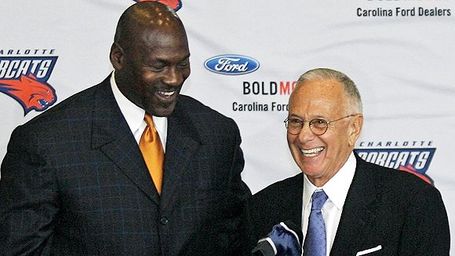 [Note: Getting tonight's game thread up early since I'll probably be away from the computer for most of the day. -Jake]

For tonight's game against Charlotte, I got together with David Arnott of Rufus on Fire for a little Q&A for a look at one of our division rivals.

I was a bit surprised when I heard that Larry Brown would be coaching in Charlotte this year. How would you say he's doing in his first year as coach of the Bobcats?

The best thing about going from Sam Vincent to Larry Brown is that now we have a true professional coach. As Wizards fans saw a month ago, the Bobcats do things under Brown that they never did under Vincent, like run a coherent offensive system, and act like they have a team agenda on defense. There are little things he does that bother me: He'll order the action slower in order to micromanage and call out specific plays. If he doesn't particularly like a player, he'll jerk him around, like he did with Morrison and I know he'll end up doing with Cartier Martin. He's also been the catalyst behind transforming the team from a run n gun freewheeling group of tornadoes around Okafor into a methodical set of grinders with a stick of dynamite in Gerald Wallace. I'm not saying that's a bad thing, but it was certainly the more difficult thing to do rather than change his preferred style of play to match the personnel on hand. I suppose management decided (I refuse to believe MJ was involved in these decisions) that they didn't hire Larry Brown to coach while they rode out Jason Richardson's contract and gathered pieces to make a run in the 2011-12 season, which would have been the prudent thing to do, if they had the long term health of the franchise in mind.

How far away do you think Bobcats are from being playoff contenders?

They're going to be in the conversation late into this year, until the people who don't look at the schedule realize they don't have enough games left to catch up. Next year, with the same core in place, they'll almost certainly make the playoffs and get swept in the first round. The next year, given the same core and with someone to replace Raja (if they don't re-sign him, which would seem silly because of our lottery pick situation), they'll probably do the same thing.

This year, the Bobcats have already made three trades and there's been rumors swirling around Gerald Wallace and Raymond Felton almost all season long. Is all of this wheeling and dealing coincidental, or is it part of some bigger plan?

Every move the Bobcats have made this year can be understood as an attempt to simply make the playoffs this year or in the next two years--in other words, during the time frame Larry Brown can be expected to stick around. I mean, they've ADDED money to the payroll for 2011-12 and 2012-13, in the persons of DeSagana Diop and Boris Diaw. It's just delaying the inevitable rebuilding process.

How has Charlotte dealt with the widespread flooding caused by the tears of Bobcats fans after hearing the news that Adam Morrison had been traded on Saturday?

There were three factions of Bobcats fans that I could identify, in relation to Morrison. One group clung to the notion that his scoring prowess simply hasn't been unlocked, and he still needs just a little time and encouragement. One group disliked him and thought he represented MJ's failures as an executive. And a third group disliked him because he was the one who stayed while Matt Carroll got traded. I'm in the second group, I'm sympathetic to the first group, and I regard the third group with caution, because no one knows what they really use as the basis for their sympathies.

As always, thanks to David Arnott of Rufus on Fire for his insight into tonight's opponent. You can check out the flip side of the interview here.

You might want to keep an eye on the transaction page today, because there have been some rumors about the Bobcats making a trade with Indiana, so if that goes down, it would affect Charlotte's depth tonight.

This is an open thread, so if you want to start the rumors up again, do it here.