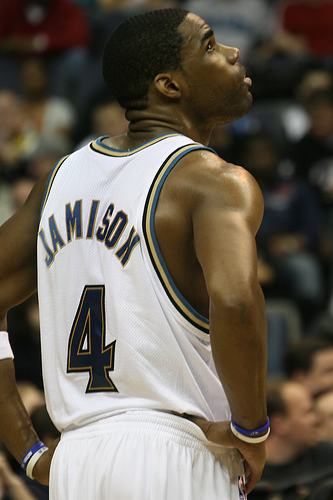 1st Clippers possession - It strikes me as odd how little guys block out in the NBA......it's almost an after-thought. Well, at least for the Wizards. In this instance, Brian Skinner remained untouched as Jamison and McGuire kind of stood around, looking at the rim...and Skinner ended up with an easy offensive board tip in.

9:08: James gets called for a carry.....needless to say, the movement on offense for the Wiz is very casual.

I'm an NBA first. I have some friends, and it's completely understandable, who favor the college game over the pro -- the college players seem to play like every possession counts. And I'm sure that some good NBA teams, like the Spurs, occasionally take possessions off. But, for the most part, they run a tight, professional ship.

To my point: the uninspired play of the Wizards just might make me watch more college ball to better balance out my entire basketball experience. The long and short of it is that the Wizards really, really suck......and it's easy to tell just from watching a single possession.

4:00: Butler just picked up a nice assist on a pick and roll with D-Song, and now he sees an open lane and takes advantage. He's looking composed on the offensive end......maybe he's resigned to the season's fate, calmed down, and is just playing his game. 17-11 Wizards.

Wha-Wha-What? Did I just catch a glimpse of Andray Blatche in a three-piece suit?

J-Critt bumbles the last possession...c'mon kiddo. The Wiz are kinda-sorta looking halfway decent against another crappy team. 26-22 after 1.

Gordon gets a layup blocked by McGee, but somehow gets the ball back TWICE, ending in a lay-in. 26-24 Wiz.

9:10: JaVale misses a one-hand dunk attempt.....two-hands would have been nice.

Brian Skinner's chin pubes annoy me. They're dyed blond....some high school B.S. if you ask me.

6:08: DeShawn Stevenson missed trey....Caron Butler really wanted that one to go in....stood up on the bench while it was in the air and everything.

Oh silliness.....the Wiz only have four players on the court during a Camby free-thow attempt. Get up Nick Young, you're still in the game fella. (cue the Debbie Downer....wamp-wah....sound).....maybe Nick was over there trying to get a candy bar.

Back to reality....Nick tries to force a drive and bumbles the ball out of bounds.

Back to awesomeness...Wizard run, a little sloppy....but Nick Young gets it for a sweet baseline slam.

And Mike James for a three-ball bucket at the buzzer! (after a made Clipper shot with 1.2 seconds left)

Look at us go! The Wizards are marginally winning for the time being. Go team go! 58-47 at the half.

Uh oh....offense breaking down early, leading to forced end of the shot clock jumpers and turnovers from Tuff Juice.

Something I like to see: Juan Dixon is the first player on the bench.....and he's the only Wizard standing up an applauding the efforts of his teammates.

Good lord, the Clips continue to turn the ball over at a high rate...18 so far.

3:48: JaVale McGee hustling put back (after an initial bad attempt) -- 8 points, 4 boards for the Choppa.

It would be nice if the Wiz stopped ignoring Steve Novak.....all he does is shoot and make threes. 73-67 DC.

2:18: I'm going to start calling JaVale McGee "fish" because he is always biting on that pump fake bait. Eric Gordon gets fouled shooting a three, makes all. 21 points for EG.....75-69 Wiz.

0:00: And what do you know....DeShawn Stevenson finally makes his first shot since coming back from injury.....a long two at the buzzer. (and if you must know, he did the 'can't feel my face' move......way to go DeShawn, way to go)

Despite 21 turnovers for LA, the Wiz are letting him hang around, thanks to 13 points in the 3rd from Erick Gordon. Wiz up 81-75 after three.

Ugh.....I thought he was trying to play more under control earlier, but Caron Butler just committed his 7th turnover of the game.

Turnover #25 for the Clippers....ESPN probably has their trigger finger on the Bennie Hill music.

The game takes forever to end, but the Wiz close it out....good stuff.

Wizards won because of sharing the ball (22 assists), Clipper turnovers (24 total), and offensive boards (18 of 'em)...oh yea, and 25 points and 12 rebounds from Antawn Jamison.