So I attended yesterday's Abe Pollin memorial service at the Verizon Center yesterday.  It was certainly a very interesting and moving ceremony, and it certainly wasn't what I expected.

The lights were dimmed, half the building was warded off and there were far more speakers than I expected.  The entire team was in attendance all wearing suits.  Some, like Mike Miller and DeShawn Stevenson, were wearing bow ties.  There was a ton of media there - TV guys, newspaper columnists like Mike Wise and Michael Wilbon, TV executives, writers, non-sports writers, etc.

And the speakers were incredibly diverse as well.  You name it, there was someone there from every aspect of Pollin's life.  There were community representatives from the Food Bank and Chinatown.  There was a law student who was a member of an elementary school class of a DC inner-city school who said Pollin promised to pay for the college tuition of every person of that class that made it into college (she said 55 of the 80 did - that's a lot of college tuition).  There were employees, former players, DC politicians such as Mayor Adrian Fenty, former executives and, of course, David Stern.  Finally, Pollin's son Robert gave a truly moving 20-minute speech in which he relayed some incredible Pollin stories.

It was definitely an interesting experience.  Some personal highlights:

Audio of some key speeches below the jump.  Apologies if some are tough to hear.  I wasn't as close to the speakers as I could have been. 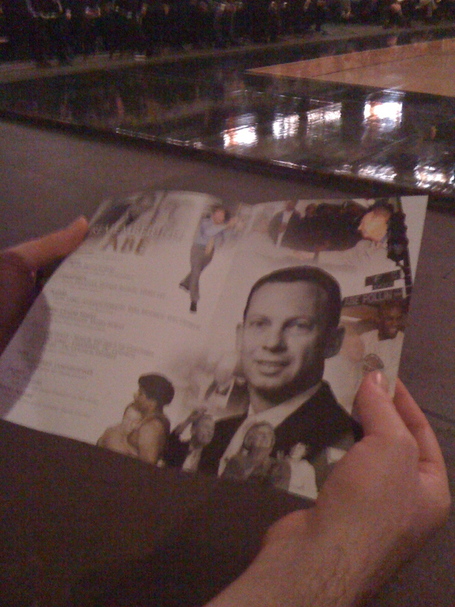 The inside program for the ceremony. Via my IPhone (explains the quality)