Wizards beat the Bucks in Milwaukee: Final wrap and appreciating our offensive execution

Share All sharing options for: Wizards beat the Bucks in Milwaukee: Final wrap and appreciating our offensive execution

I mentioned yesterday how I felt this was the biggest win of the season, when you consider all the circumstances (Gilbert Arenas getting hurt, being on the second night of a back-to-back, playing in DC the night before, playing great offense against a lights-out Bucks defense, etc).  I still feel that way tonight, because for the first time, we took some adversity and worked harder rather than rolling over.

Arenas' injury couldn't have come at a worse time.  He got hurt trying to drive to the basket, instead drawing an offensive foul when Ersan Ilyasova slyly slid in.  The Bucks had a two-point lead and were on a pretty nice run.  Things didn't look good, to say the least.  The Wizards' offense had been functioning well to that point, thanks to some hot shooting that probably won't be there every night, but the Bucks had begun to clamp down.

It was precisely then that the Wizards reached a gear they hadn't reached.  We've bemoaned the team's offensive struggles all year, picking correctly at everything from the deployment of players to the silly emphasis on long, contested jumpers, but the real problem was that we didn't have enough urgency in running our sets.  Let's face it, Flip Saunders' offense works.  It's worked at every NBA stop, from Minnesota (where they had very little talent outside KG) to Detroit (where they had a lot of talent).  One major problem is that the players were not working hard enough to make it work.  We see a lot of contested jumpers in part because nobody screens well enough to get guys free.  Those shots still get launched because our guards dribble too much and out guys are impatient.  In short, we had a major execution problem on our hands.

That execution was there tonight.  The Wizards scored on nine straight possessions in the fourth quarter on the second night of a tough back-to-back against possibly the most physical defense in the league.  How?  By running their offense.  On the first play out of a timeout, they ran a staggered baseline screen for Caron Butler that results in a wide-open 20-footer. Here's a screenshot. 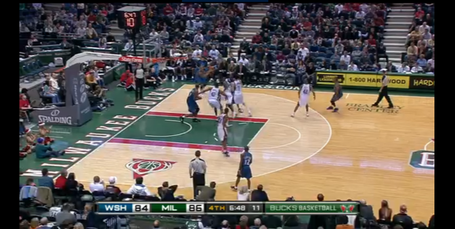 Let's take a closer look.  Look how Antawn Jamison goes the extra mile and screens out essentially three people at once (Butler's man, his own man and Brendan Haywood's man). 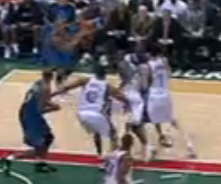 Want to know how Butler got a wide-open look? That's how. When we talk about attention to detail, this is what we mean. That play changed the whole game -- Butler hit the shot, Jamison got fouled, and suddenly the Wizards were winning again.  The Wizards then scored on eight straight possessions following that and sewed up the victory.

Tonight should be proof to the players that, hey, Flip Saunders' offense works.  You also have to credit Saunders for simplifying the offense early, allowing Gilbert Arenas to go at Brandon Jennings and totally take him out of the game.  Arenas was hot early, was aggressive and made plays for others too.  Then, late in the game, the players returned the favor by executing Flip's sets impeccably.

Were there still a lot of jumpers?  Sure.  But we knew we'd shoot a lot of Js with this group. The problem was they were from bad spots and with hands in people's faces.  If they come in good spots and are open, they should go in like they did tonight.  This is the type of offensive performance that should be common with this group.  Here's hoping we see it more often.

More screenshots below the jump.

Snap Reaction: Wow, I don't think I've ever seen an OREB% number that low.  But hey, we shot the lights out and got to the free throw line.  The defense was also outstanding, though it helped that Scott Skiles played mind games with his best player (Jennings) the whole game.

Snap Reaction: If we're going to bash Antawn Jamison for his tantrum last night (and we should), we gotta give him major props tonight.  Incredible efficiency (25 points on 12 shots) and a great job at doing the little things (such as above).  He also played really good defense, holding the dangerous Ersan Ilyasova to just four points on 1-8 shooting.

Three more possessions down the stretch jumped out at me, and since I'm out of market and actually could get screenshots of this game on NBA League Pass, I'll make this a more visual exercise.

Two possessions after the one cited above the fold, the Wizards run the same play for Caron.  It starts with Earl Boykins handing the ball off to Randy Foye (imagine that!). 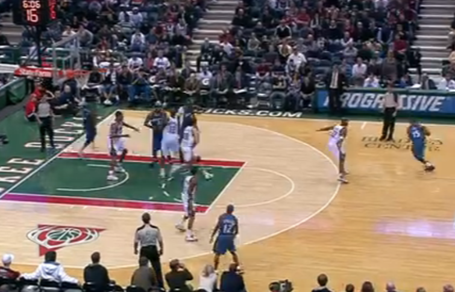 Carlos Delfino, Caron's man, is trying to cheat the screen, as you see in this picture.  But notice how Butler sits back in the corner instead of curling up to the wing, as I believe is the purpose of the play?  Butler's been really bad this year at off-ball movement, but he displayed excellent basketball IQ here to free himself for the wide open jumper. 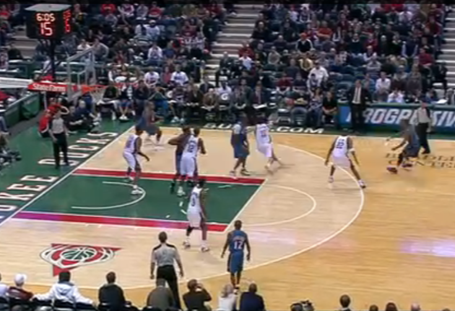 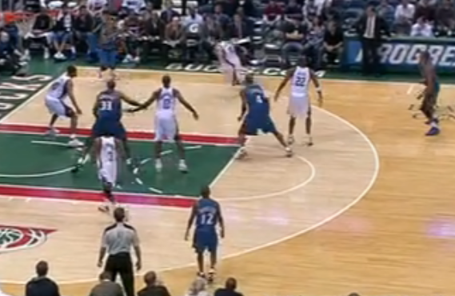 End result?  Wide open shot, swish.  For all of Butler's struggles with catching and shooting, the real problem a lot of the time was moving without the ball.  Butler hasn't put himself in good position to catch-and-shoot.  In this play, he did.

Two more possessions later, Foye and Jamison run a beautiful screen and roll to get Jamison an open flip shot.  The set starts off the same way as the two that gave Caron an open shot -- with Boykins giving it off to Foye, who then circles back to the top of the key. 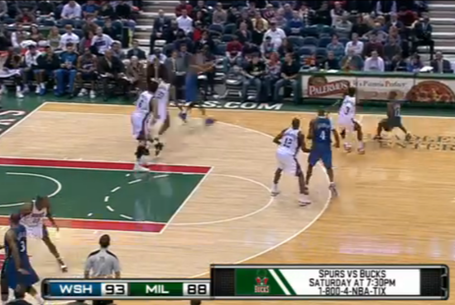 But because the play for Caron has worked twice in a row, the Wizards instead run a different option off the set -- Foye/Jamison screen and roll. 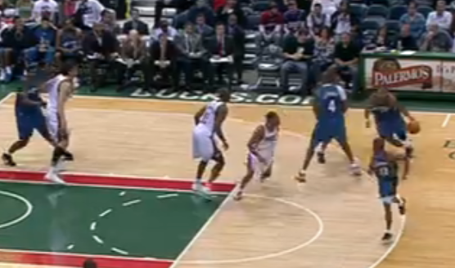 Jamison sets a nice, solid screen, which we haven't often seen this year.  Meanwhile, Foye dribbles left right into all the defensive attention.  The presence of Boykins here helps because it draws his man, Brandon Jennings, to Foye in addition to Foye's man and Jamison's man. 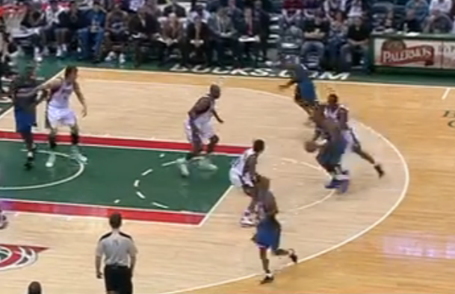 This couldn't have worked out better -- three Bucks looking right at Foye as Jamison slips away.  All those Bucks players were so concerned about Butler from the previous possessions that they all lose their minds and mess up their rotations.  Foye isn't a threat driving to the rim -- at the very least, he's not the threat Jamison is -- yet they all have their eyes on him because they're not sure how to guard this variation of the set. 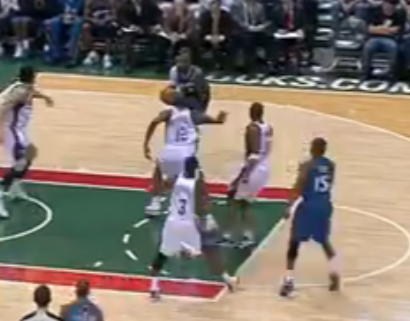 Foye drops it off to Jamison, Luc Richard Mbah a Moute (a fantastic defender) gets back late, and Jamison puts it in.  Beautiful execution, great recognition.  For the whole possession, the Bucks were behind.  They expected another play for Butler and were scrambling when it never came.  This is a league where the half-second means a lot, and the Bucks were just a half-second behind the whole time because they expected something else.

Finally, I want to show the unselfish play of Butler on the one possession where Earl Boykins gets a layup.  It hasn't been a good possession thus far.  The Bucks cut off the pass to Foye, and a Boykins/Jamison screen and roll gets nowhere.  The final option is Butler in the post, but Boykins either doesn't know that or breaks it. 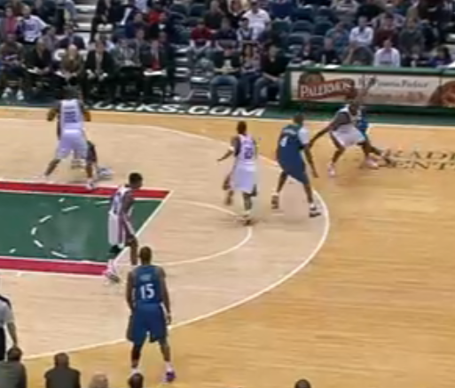 Easy time for Butler to get frustrated and give up on the play, isn't it?  Look, he's open and has his man sealed, yet Boykins ignores him.  Instead, Butler gives up his body and sets a vicious screen to set Boykins free from his man. 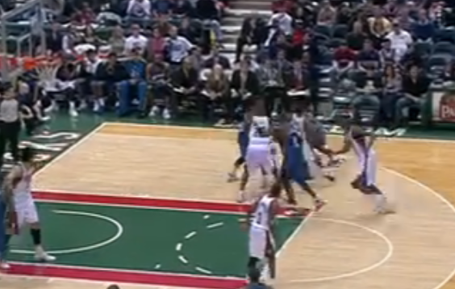 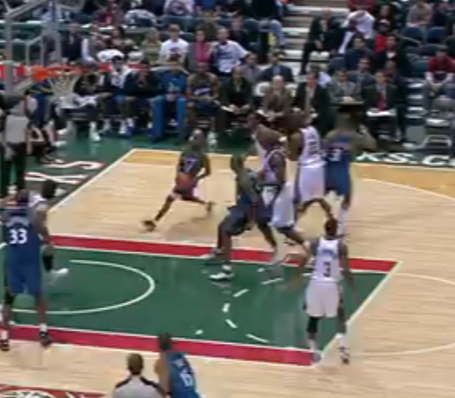 Look, guys.  Trusting the offense and helping each other out works!  So let's stop jacking and trying to get ours, shall we?

Next step is carrying this over to Minnesota.  No letting up, please!