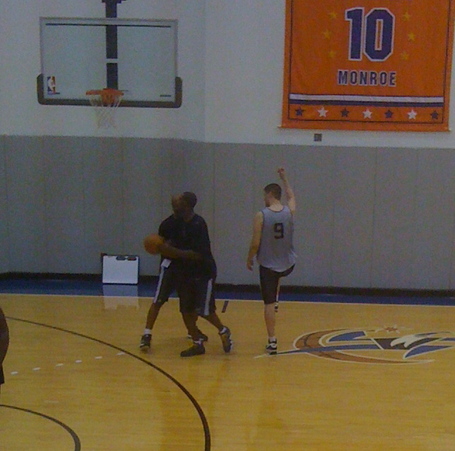 Andray Blatche works with Assistant Coach for Player Development Gene Banks, as Paul Davis looks on.  Via my IPhone.

Coming off a big win over Dallas on Tuesday, the Wizards were in pretty good spirits after practice today.  Flip Saunders said the club went through a very good practice and emphasized the importance of maintaining those winning habits throughout the "process."

Once again, Gilbert Arenas did not talk to the media, telling NBC's Lindsay Czarniak that he only talks when they make him.  So, once again, nothing new on that front.  However, there's a lot of interesting nuggets to chew on from today.  Make the jump to read about Andray Blatche's late-night workout, an update on Javaris Crittenton's injury, some thoughts about the Randy Foye/Gilbert Arenas backcourt and more.

Andray Blatche had an outstanding first game of the 2009/10 season last Tuesday, notching 20 points, 7 rebounds and only 3 fouls in 35 minutes.  But as we all know, Blatche has had plenty of good games in his career.  Sustaining that success has proven to be an elusive quest for the 23-year old.

After practice today, Blatche made it clear that he knows his big opening game means nothing if he can't sustain it.

So how did Blatche try to build on last Tuesday's performance?  He called Sam Cassell late last night and asked him to come in to do a workout with him.  Blatche said they came to the Verizon Center at around 11:15 and went until about 12:30 in the morning.

"[We worked on] all the situations that would be in the game," Blatche said. "Post-ups, pick and pops, stuff like that.  All game-type situations."

It's yet another example of the new "Seven-Day Dray."  When asked whether he would have ever come in for a workout that late in the past, Blatche said no.  He also joked that the empty arena spooked him a bit.

"Man, it was a little scary, I ain't gonna lie," Blatche said. "I called my best friend.  I had to go to the locker room by myself, I was a little scared.  It's so quiet, and dark a little bit.  I'm telling you all, it's different at nighttime, but I was alright."

Eventually, though, the conversation veered back into Tuesday night.  Blatche said Fabricio Oberto did a great job guarding Dirk Nowitzki, and also praised the team's pick-and-roll coverage.  He also once again sung the praises of Flip Saunders' offense.

"I think he's getting it," Jamison said.  "I think he understands that it's not about what [he] does on gameday, or the day before, or the night before.  Little things like that will help you stay consistent and be able to do that night in and night out."

Video below, courtesy Truth About It:

Those of you looking forward to seeing Javaris Crittenton return to the court will need to wait a lot longer.  Crittenton was limping around on crutches today, with yet another boot on his injured ankle.

Team spokesman Scott Hall told me that Crittenton went to get "an exploratory scope" last Friday that revealed nothing new.  Hall didn't mention anything about how long Crittenton was expected to be out, nor did he say that the injury got any worse.

However, Mike Jones talked to Crittenton, and Crittenton told a slightly different story.  Crittenton told Jones that he had surgery last Friday to clear up some torn cartilage that had been found in previous X-Rays.  But Crittenton also admitted that he was hoping to get this procedure done sooner.

"I wish the procedure would have been happened, so I could have recovered by now," Crittenton told Jones. "They actually saw it on the X-ray a long time ago, but they had to continue looking at different cat scans and X-rays to get it done."

Would having the surgery earlier have changed things?  Did they really see these problems a long time ago and unnecessarily looked several more times before having the surgery?  I don't know. I think there's a lot of information missing here.  But it certainly seems odd, doesn't it?

Crittenton said he has two more weeks of recovery, followed by four weeks of rehab, which means he'll be out at least another six more weeks.

Randy Foye and the "small" backcourt

As I mentioned yesterday, when Gilbert Arenas and Randy Foye played together last Tuesday, the Wizards outscored the Mavericks by 14 points.  When I asked Saunders about why he turned to that pairing despite not using it much in the preseason, Saunders joked that "there are a lot of things I do during the regular season that I don't do in preseason."  I then asked when we might see it in the future.

"You'll see it a lot," Saunders said. "A lot of it depends on the defensive end.  If we're playing Kobe Bryant at the 2, you might not be able to put Randy on Kobe because of Kobe's size.  A lot of that is going to depend on defensive matchups.  There was a situation in Dallas where they played a couple smaller guards."

Foye said he was wondering when he was going to get a chance to play more with Arenas, but added that "[Saunders] probably didn't want people to see it."

"When you put us in together, Dallas didn't have an answer to that," Foye said. "With two scorers in there together, because if you pay too much attention to [Arenas], you gotta help, then we kick it out to me for an open shot.  It's the same [vice versa]."

I was particularly struck with what Foye said later, when he talked about how his mentality and comfort level change when he plays with Arenas.

"When you play with someone of that caliber, it's easy," Foye said.  "Everything else comes easy.  Like, when they were pressing at the end, they couldn't get the ball, because we could both break the press.  When they press and denied him, I got the ball, and when they doubled me with his man, I passed him the ball.  It just makes it so much easier playing with another ball-handler."

Foye also praised Saunders' strategic instincts, saying, "it's like he's playing chess up in his head."  Regardless, with so many teams nowadays playing small backcourts, the Foye/Arenas backcourt should be a regular staple. 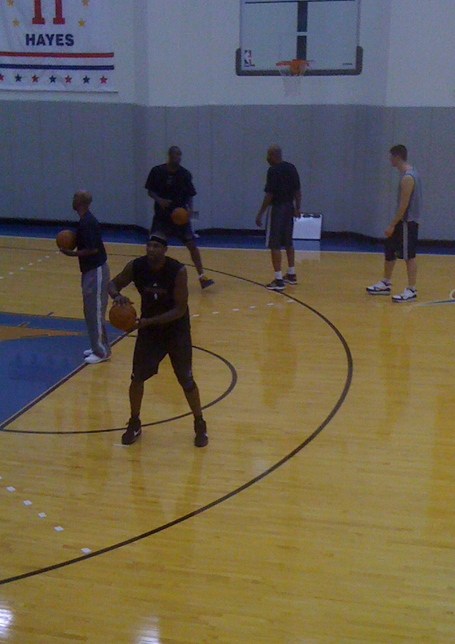 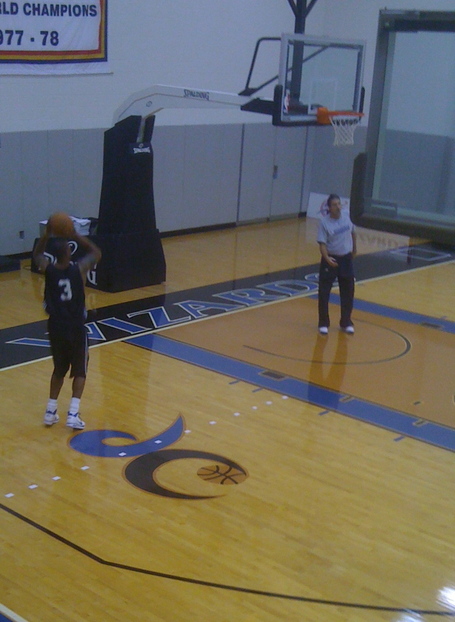 Caron Butler works on his shot while Randy Wittman looks on 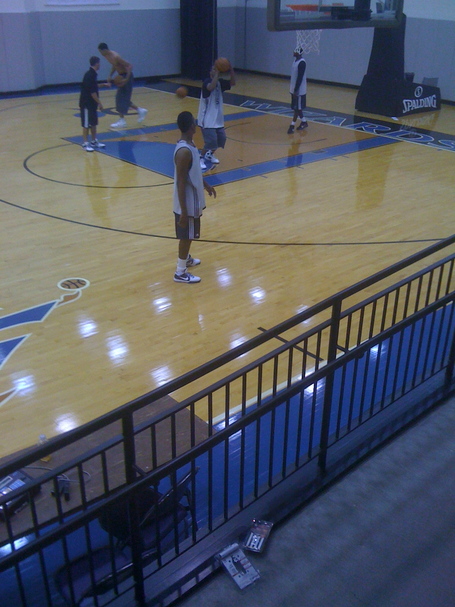 Dominic McGuire works on his shot while Nick Young looks on