Thursday's Practice Report: Andray Blatche's progress, Caron Butler's fit into the offense and the defense, and Fabricio Oberto tells me I should try alfajores

Share All sharing options for: Thursday's Practice Report: Andray Blatche's progress, Caron Butler's fit into the offense and the defense, and Fabricio Oberto tells me I should try alfajores 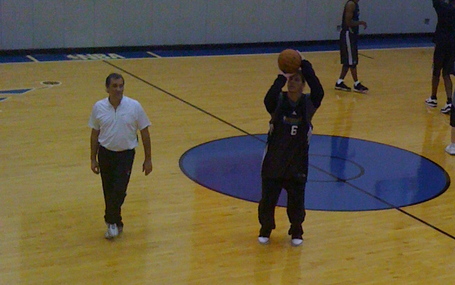 Mike Miller shoots while Flip Saunders looks on at the end of practice today.  Photo from ... my IPhone, which explains the poor quality.

The Wizards sandwiched in a practice between their win Tuesday over Philadelphia and their final game of the preseason tomorrow against the Bulls that coach Flip Saunders deemed one most competitive practice he's seen thus far.  That's pretty significant considering it comes late in a preseason that has seen the team hit the road a lot.

Saunders didn't have any new news on Antawn Jamison, other than to say he's getting an MRI soon and that he's recovering well, but did say he intends to start Gilbert Arenas and Mike Miller ("our swine flu backcourt")  against Chicago, along with Butler, Haywood and Fabricio Oberto most likely.  Arenas and Miller both practiced and looked good.

In case you were wondering if Arenas talked today, the answer is no.  He zipped by with his headphones on at high volume, and when tapped on the shoulder to talk, he said "They told me I didn't have to talk to you guys today."

How exactly is Andray Blatche's preseason been?

I came in today hoping to get some insight about how Flip and company feel about the most divisive Wizard on the roster, Andray Blatche.  (I was hoping to get Blatche's insight too, but he slipped out while we were talking to Caron Butler).  The one thing that's certainly clear based on today is this: Flip Saunders still believes in the guy.  He's still working with him and trying to get him to improve, but he feels Blatche has had a good preseason and is likely a part of the rotation.

"Andray's had a really good preseason," Saunders said.  "He's had a lot of double doubles, played really well for us."

Then, Saunders switched gears mid-sentence, as he is apt to do, and discussed how his decision to start Fabricio Oberto against Chicago has as much to do with Blatche as Oberto.

"I might be in a situation where I'd bring [Blatche] off [the bench] just to get him into that role, knowing that when Antawn [Jamison] comes back, he can continue in that role."

I take this as good news for Blatche because it means Saunders is counting on him to be the first backup big man off the bnech.

But I couldn't resist a couple follow-up questions about some of the things we've been wondering about with Blatche.  I asked Saunders about how Blatche has been doing picking up things defensively.  Like many of you, I wonder about his fundamentals, but as bwoodsxyz noticed when he tracked the Wizards' defense, Blatche actually performed quite well when you take a closer look.  Flip's response?

"He's making good progress.  He just gets frustrated with himself when he makes a mistake.  He has to learn to play through them.  But he has done a good job, and what he has done is that, when he's had a bad stint for five or six minutes, he's come out of the game and gone back in and played pretty well."

Okay, so maybe that answer wasn't about defense.  Nevertheless, what about Blatche's offense?  I mean, he's shot a lot of jumpers, and hasn't really taken the ball inside much.  I asked Saunders how much of that was by design and how much might he want to see Blatche inside more.

"You got to be able to do both [play outside and inside].  You got to be versatile.  It’s what they take and what they give.  We don’t have some of our low-post offenses in.  Some teams we’ve played, they’ve done some different things defensively inside, and that’s given the ability for other guys to have more open shots."

So, while it's hard to decipher something out of those answers, it is clear that Blatche is doing most of what Saunders asks him to do.  That's a good sign for Blatche's quest to be in the Top 8.

Caron Butler as a lockdown defender

You probably read how Kyle picked some screenshots out from the 76ers game to indicate that Caron Butler still isn't close to being there as a lockdown defender.  Today, Kyle asked Butler himself how he felt about his defense:

"So far so good. You know, still gambling a little bit after looking at some film. But, it’s still preseason … just trying to focus in on the rotation for the most part, getting to spots, talking and communicating as much as possible. And … so far so good."

It appears Butler feels he's further along than Kyle (and I) do.  But leave it to Fabricio Oberto to throw in a confusing, yet apt metaphor for how defense is supposed to be played.

"You can't be on and off with your defense," Oberto said. "[You got to do it] In the first quarter, in the third quarter, when you have the water in your mouth, etc."

Presumably, Oberto meant that you have to play defense even when you're tired.  I couldn't tell.

On a related note, Butler admitted he couldn't always understand Oberto either.

"I love Oberto," Butler said.  "I don't know what he's saying all the time, but I know he's talking to me."

Case in point: while Butler was talking with Dan Steinberg from the DC Sports Bog (welcome back to the Wizards, Dan!), Oberto asked Butler if he spoke Spanish.  Butler looked confused, eventually staring back at the reporters as if to say "what did that dude just say?"

Butler talked about how he felt he picked things up quickly with Antawn Jamison and Gilbert Arenas back out there, then sounded visibly frustrated when saying "they just won't let us play together."  He, of course, was referring to injuries and sickness, not any particular person.  But he also talked about getting the ball in different spots than before in Flip Saunders' offense.  I asked him what those spots were.

"17 on in, elbow, logo, pick and roll situations," he said. "All situations in which, as an offensive player, you love to get the ball.  You have the opportunity to be aggressive, make plays for your teammates, potential situation to get to the foul line, stuff like that, so real good situation."

That was a happy Butler.  A different Butler moment came when he was asked about Arenas being named as a team captain.  Sounding a bit annoyed, probably because he didn't feel like answering for Gilbert, Butler said, "You'll have to ask him," and later added, "We hadn't talked about the captain thing yet."  You could read this as Butler getting annoyed about always having to speak for Gilbert while Gilbert ducks out of his media responsibility.  My take: probably not a great question to ask (forgot who asked it).  We do have no choice at times with Gilbert not talking, but it's always weird for another player to have to speak about his peer like that.

Kyle and I have spent a lot of time talking to Oberto at these practice gatherings.  It can often be hard to understand him, but Oberto's a very willing talker who will answer any type of question, even if he might be a bit dry.

Some things I learned about Oberto today:

You may have read about how Spurs blogger Pounding the Rock gave Manu Ginobili some Argentinian cookies called alfajores before a game as a nice gesture, since the Spurs were playing in Austin and there's an Argentinian bakery there that makes them.  Apparently, New York Times writer Howard Beck felt this violated some sort of journalist/subject code, and tweeted about how much it annoyed him (to which I say: well, maybe you're technically right, but who cares?  Clearly PTR isn't there for the same reasons you are, and it didn't harm you in any way, so why make a fuss?).

Anyway, long story short, I asked Oberto, an old buddy of Ginobili's, whether he had ever been given any Argentinian food before games (I forgot the name of the cookie, so I kept the question general).  "> tweeted about how much it annoyed him (to which I say: well, maybe you're technically right, but who cares?  Clearly PTR isn't there for the same reasons you are, and it didn't harm you in any way, so why make a fuss?).

Anyway, long story short, I asked Oberto, an old buddy of Ginobili's, whether he had ever been given any Argentinian food before games (I forgot the name of the cookie, so I kept the question general).  "Sometimes, when we go to cities like Miami, there's a lot of Argentinians there, so [people] bring you the cookies, they call them ajfajores."  So, basically, Oberto's been given alfajores before games before too.  He described them as "caramel in the middle, chocolate on the outside," and suggested to me and Steinberg that we try them sometimes.

If you're really curious about what alfajores look like, here's a picture.  They look pretty damn good, if you ask me.  Anyone know any Argentinian bakeries around here, both for mine and Oberto's sake?

A couple more pictures from my I-Phone (so excuse the poor quality please). 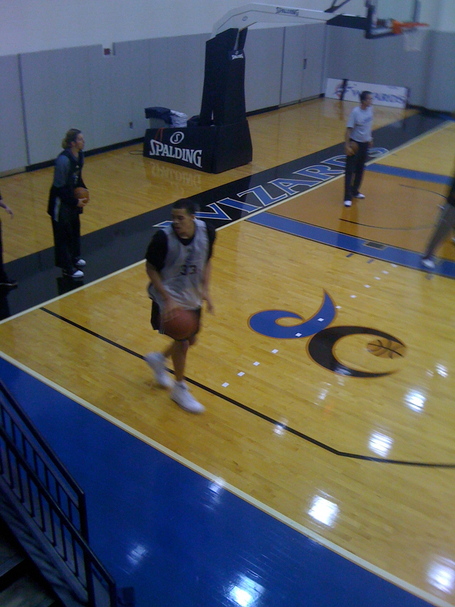 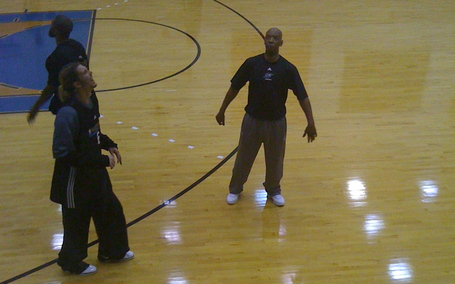 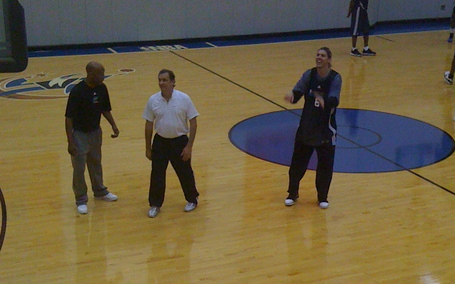 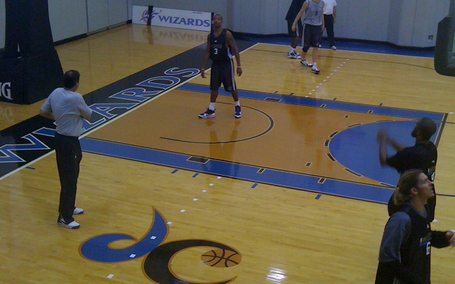